Is foiling Settling down

Is foiling Settling down

On Facebook I asked if foiling was settling down enough for a foil/fin quiver to emerge. Consensus was foiling is the lightwind option where people used to have fin/8m+. Not much use of foils in stronger winds, even if the experts can. Do you concur/differ?
Top

I think the foil designs are changing the least.
Board and wing designs are having the most r and d.
Wings I think will be more successful on the open sea for the masses. The boards are super compact and the next generation wings are more refined and rigid. Launching a windsurf foil on the south coast relies on no shorebreak or a long walk at low tide, above a force 3 and the chop gets too much to be fun. This is why everyone on here that uses a foil is on a flat water location.
Wings and super compact foil boards are much easier to launch and designed to be manouverable on swell and surf, these will ake them more appealing to open water users.
Wing foil boards are sub 180cm, some are below 45l for the experienced.
Top

Yet to see a wing and foil board in UK, only in Tenerife where people were picking it up quickly but not especially light winds.
Top

As I hear it's a bit of a myth that a 4m wing is enough. Probably a 5m for many and a 6m for the 85kg fellow. Technique is going to play a large part, becoming more efficient as you progress. It'll be interesting if Naish bring out more sizes, 4m do it all wing seems optimistic. Gong now have 3 types of wing out now although I suspect they will drop the first more basic one from the range.
Top

For me foiling is a light wind windsurfing option. If its windy enough to use a wing-thing I'll be windsurfing on a wave board.

Windsurf foil boards are getting shorter and better (my Naish is only 2m long @130L and the new starboards are even smaller with even more volume). The volume really helps uphauling in a bit of chop.
Top

From what I've seen you can use a wing in the same or less wind than an equivalent sized windsurfing sail and then have supreme maneuverability. Vids I've seen have them out with the surfers, fully foiling tiny boards, definitely no windsurfers.
Top

maker wrote: ↑Sun Dec 22, 2019 9:37 am On Facebook I asked if foiling was settling down enough for a foil/fin quiver to emerge. Consensus was foiling is the lightwind option where people used to have fin/8m+. Not much use of foils in stronger winds, even if the experts can. Do you concur/differ?

I think foiling is settling down enough for the various choices of foiling to become clearer. Foiling is turning out to have a wider range of choices than windsurfing IMO, but not all of them would be windfoiling.

Wing foiling is somewhat similar to windfoiling, but I think it is more suited to a smaller set of conditions - in which it may have advantages.

In terms of the foils themselves, for high speed, the type of racing foils we see now, are likely to contine with some developments as stability is so important at high speed. Detuned versions of the race foils may be where the freeride foils will sit.

The standard type of foil with a bigger front lifting wing and downward pushing rear stabiliser covers just about all of the range of needs.
There is a canard type of foil, which has a larger rear wing and both wings lift upward, but combine to provide stability.

I'll add a bit more about the monofoil, because it has advantages over the current foils of less drag and more manoeuvrability and efficiency, and it is hard to resist more efficiency in sport.
The monofoil with one wing requires the foiler to do the stabilising, but there is some progress in making the monofoil easier to ride. It has advantages in efficiency and manoeuvrability, but the rider has to be at a higher level of skill.
This is a monofoil.
And this has a mixture of normal foil and monofoil riding (from 4:17) with a Duotone inflatable wing.

A production carbon monofoil that is available from Delta Surf Foils.


An explanation from one of the pioneers of monofoiling of what the differences are. 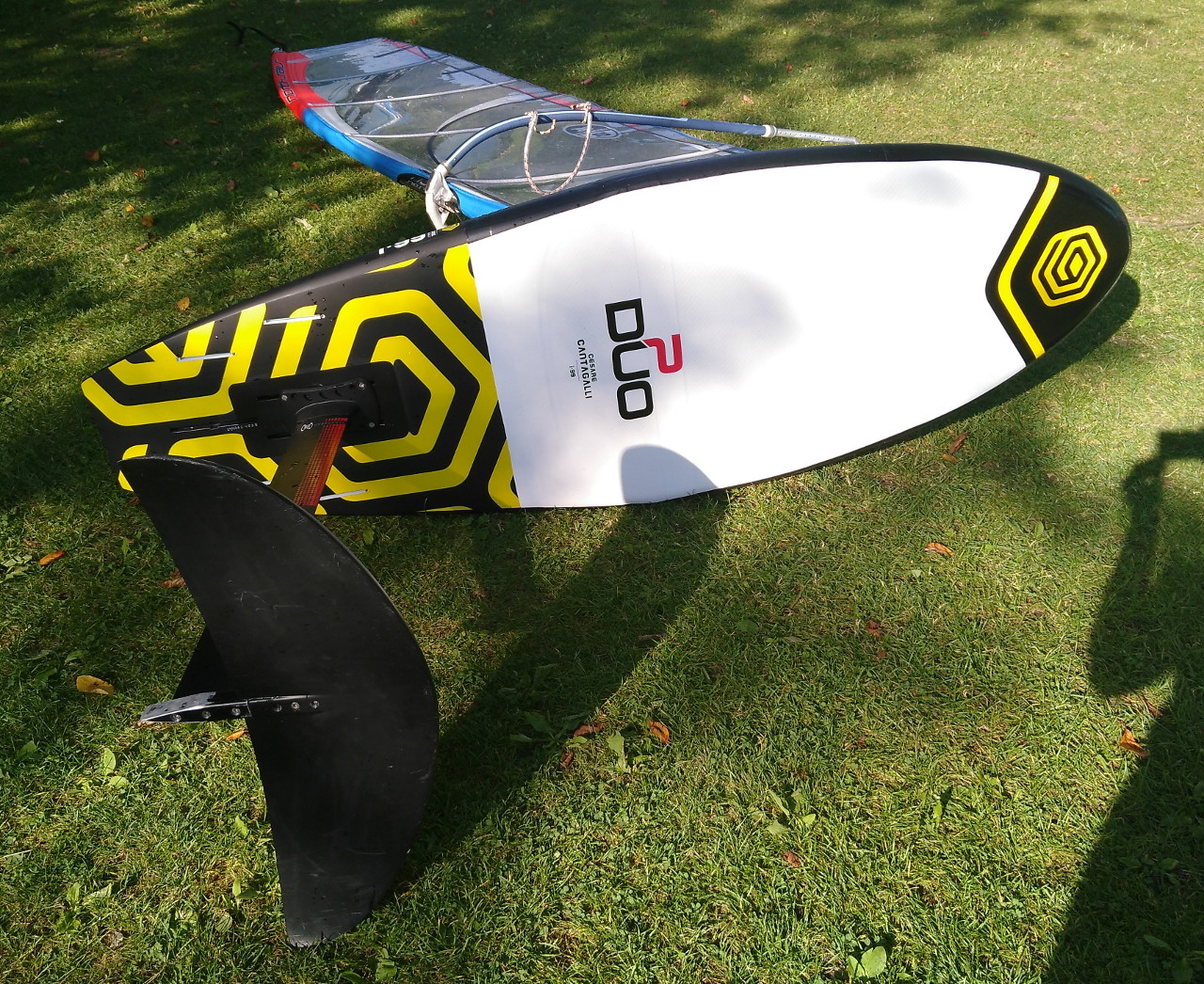 James.blonde wrote: ↑Sun Dec 22, 2019 6:11 pm From what I've seen you can use a wing in the same or less wind than an equivalent sized windsurfing sail and then have supreme maneuverability. Vids I've seen have them out with the surfers, fully foiling tiny boards, definitely no windsurfers.

Really? Vid above on the wing its pretty windy, there is a regular windsurfer absolutely flying in the top left of the shot at one point.

I've seen two people trying it in Wales in 5.3 / 5.7 wind (more wind than I would ever want to foil in) and it looked hard and neither of them got up on the foil. It stands to reason with less float in the board, and less sail power (3/4m sail) you are going to need more wind!
Top

No Rod I'm totally making it up as you must have seen all the videos online.

For those remotely interested, you may find it on you tube.

It wasn't the video I was talking about but shows what is possible, the vid I saw had a guy pumping a wing on a submerged tiny board in the same wind as this video. It defies physics.
Maybe Rods guys weren't that good, maybe
Top
Post Reply
51 posts