Chat about stuff that doesn't fall into the other categories here.
Post Reply
10 posts • Page 1 of 1

They better hit the water ASAP in Ulsan, as the first day has the best wind forecast and it should be full on Slalom conditions.

The live racing should be on from early tomorrow morning - UK time.
Top

Day 1 has been a washout. The rain seemed to kill the wind and though they sent the women out and they were foiling, a mixture of seaweed and shifty uncertain wind made fair racing unlikely.

The forecast had looked like Day 1 was to be the windiest day, but the forecast seems changeable and apparently SW is the best wind direction for Jinha Beach. It seems like it will be like the other Slalom locations this year - marginal and unpredictable, so they will have to make the best of whatever comes.
Top

Day 2 is another non-event, and sailors have been released for the day. Wind picked up around 4pm but was varying every way possible and there was lots of seaweed.
Delphine heading out yesterday amongst the seaweed. 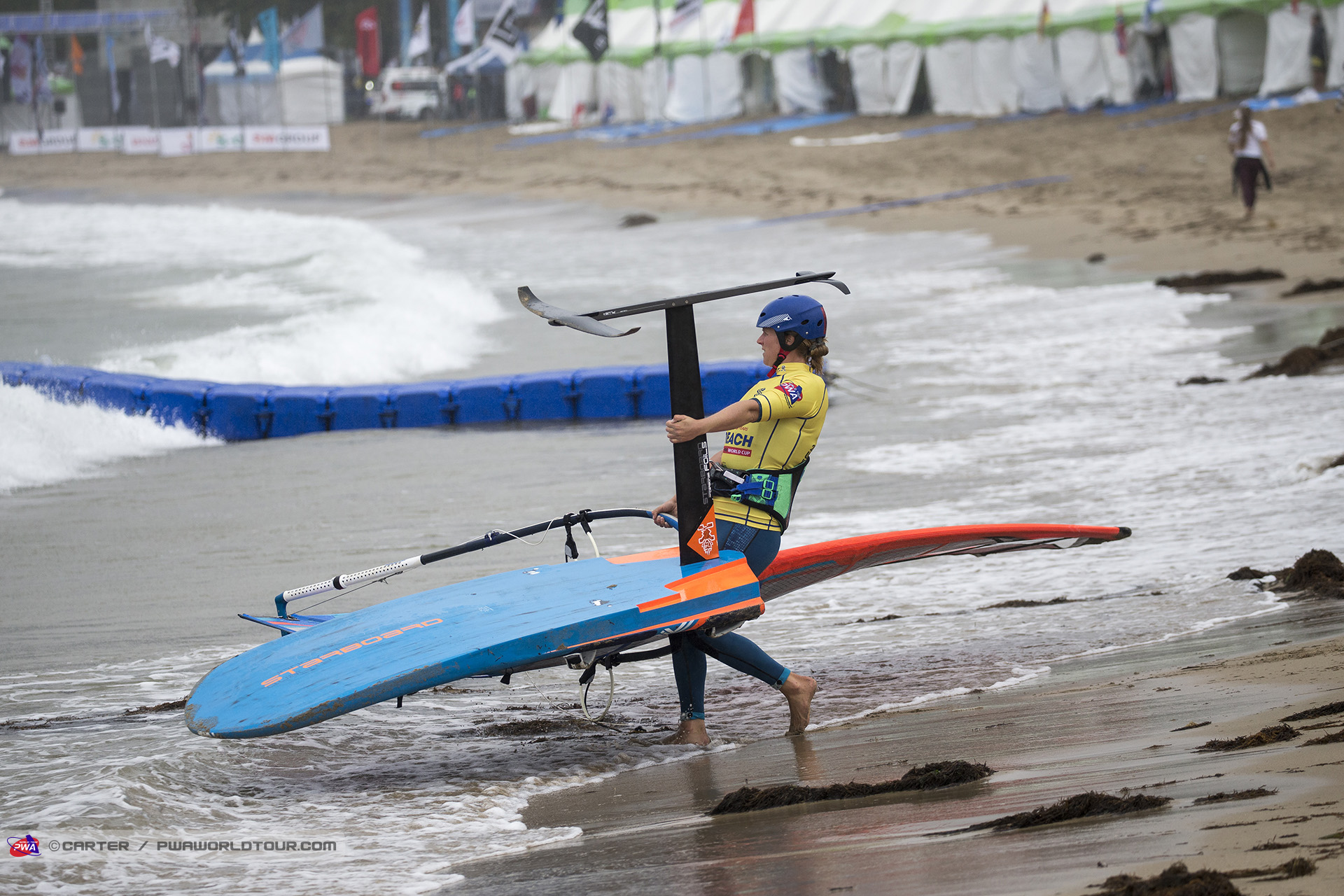 Listed on the PWA as Marina Alabau, but it is younger sister Blanca - capturing the level of excitement currently. 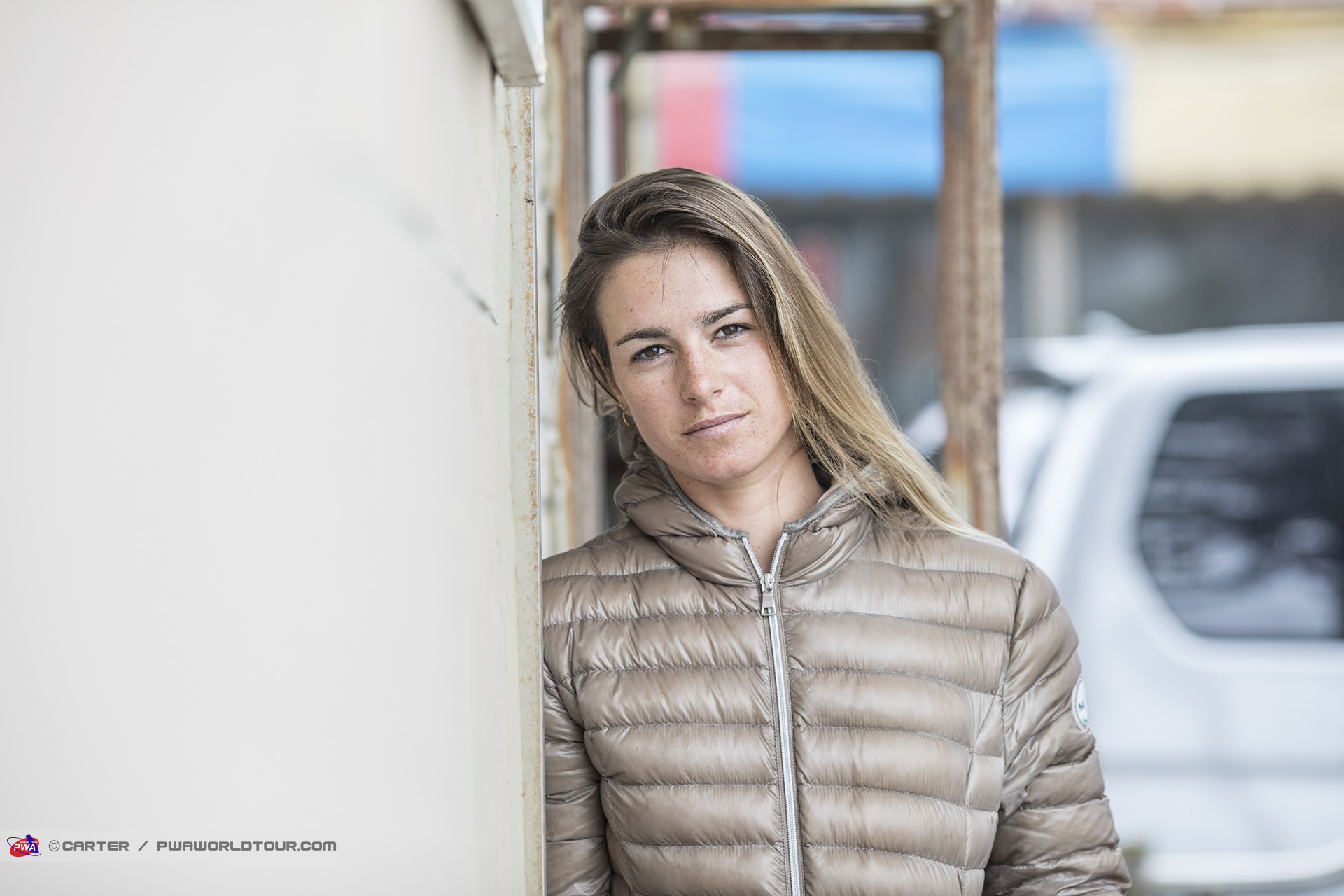 Taty his usual happy self though. 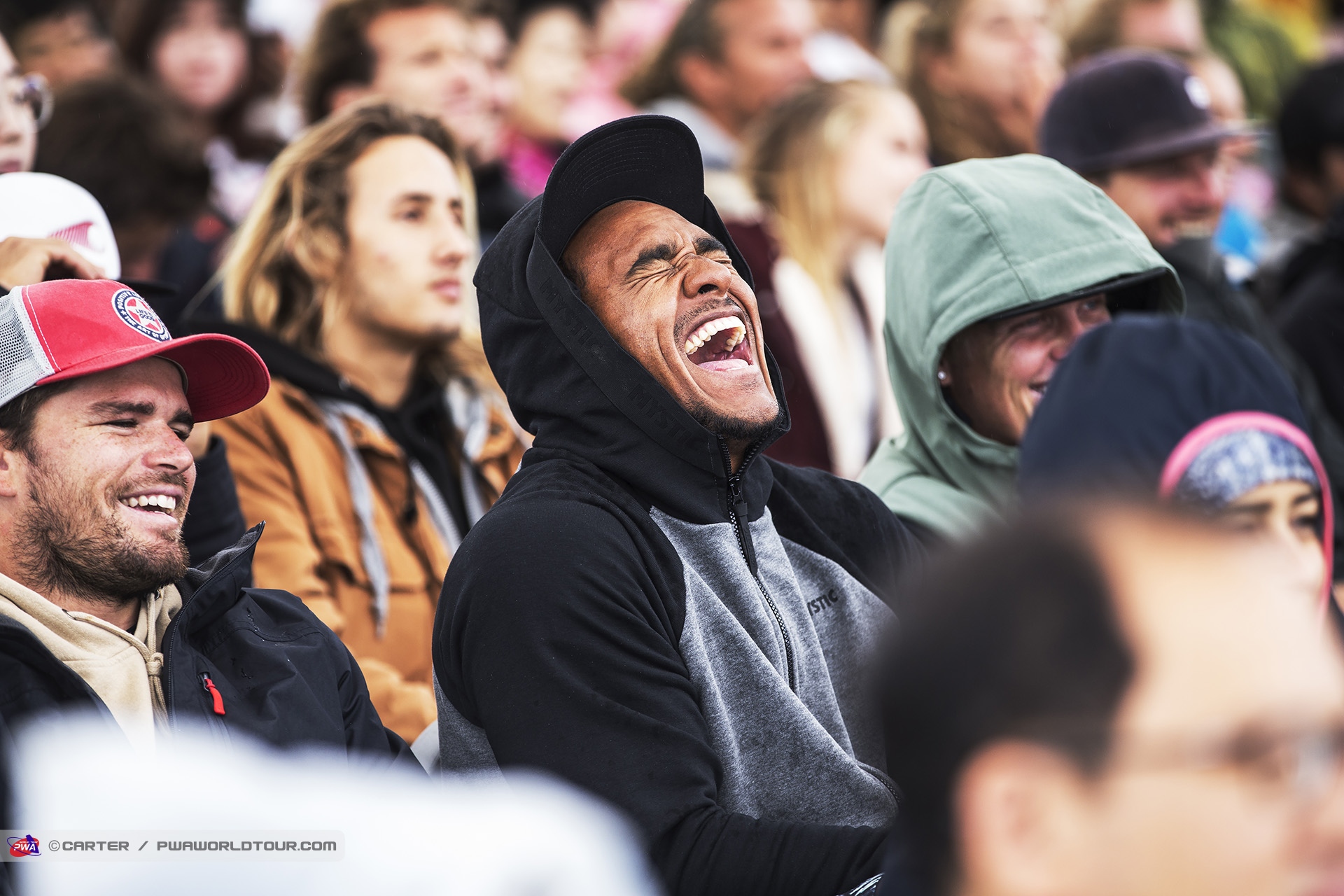 A teeny bit of action on Day 3.

2 Women's foil races completed with one victory each for Marion Mortefon and Delphine Cousin Questel.
Even with the wind in a good direction and some sunshine, the wind didn't happen. That is the sum total of the first half of the event - we need something much better weatherwise for the next 3 days. 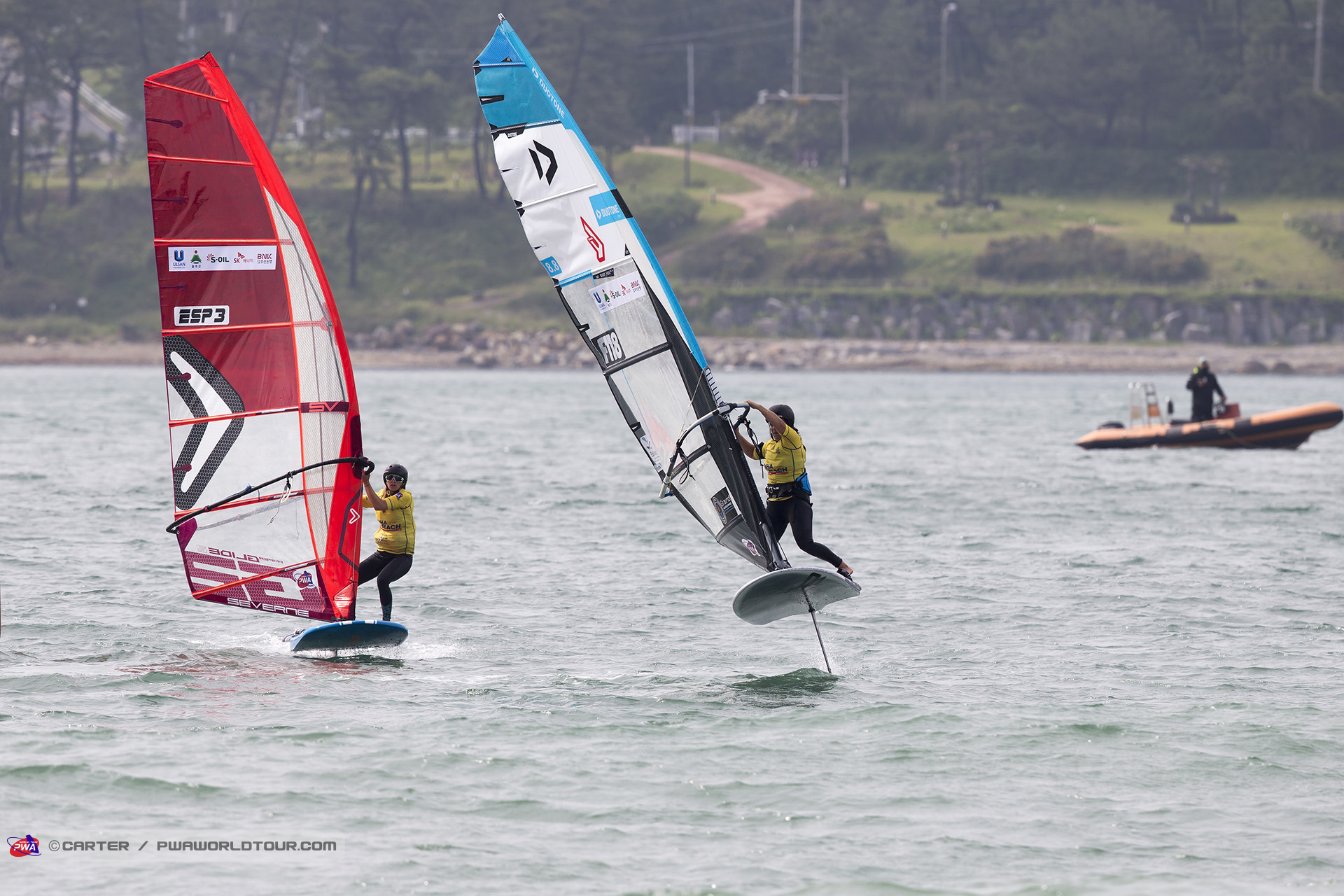 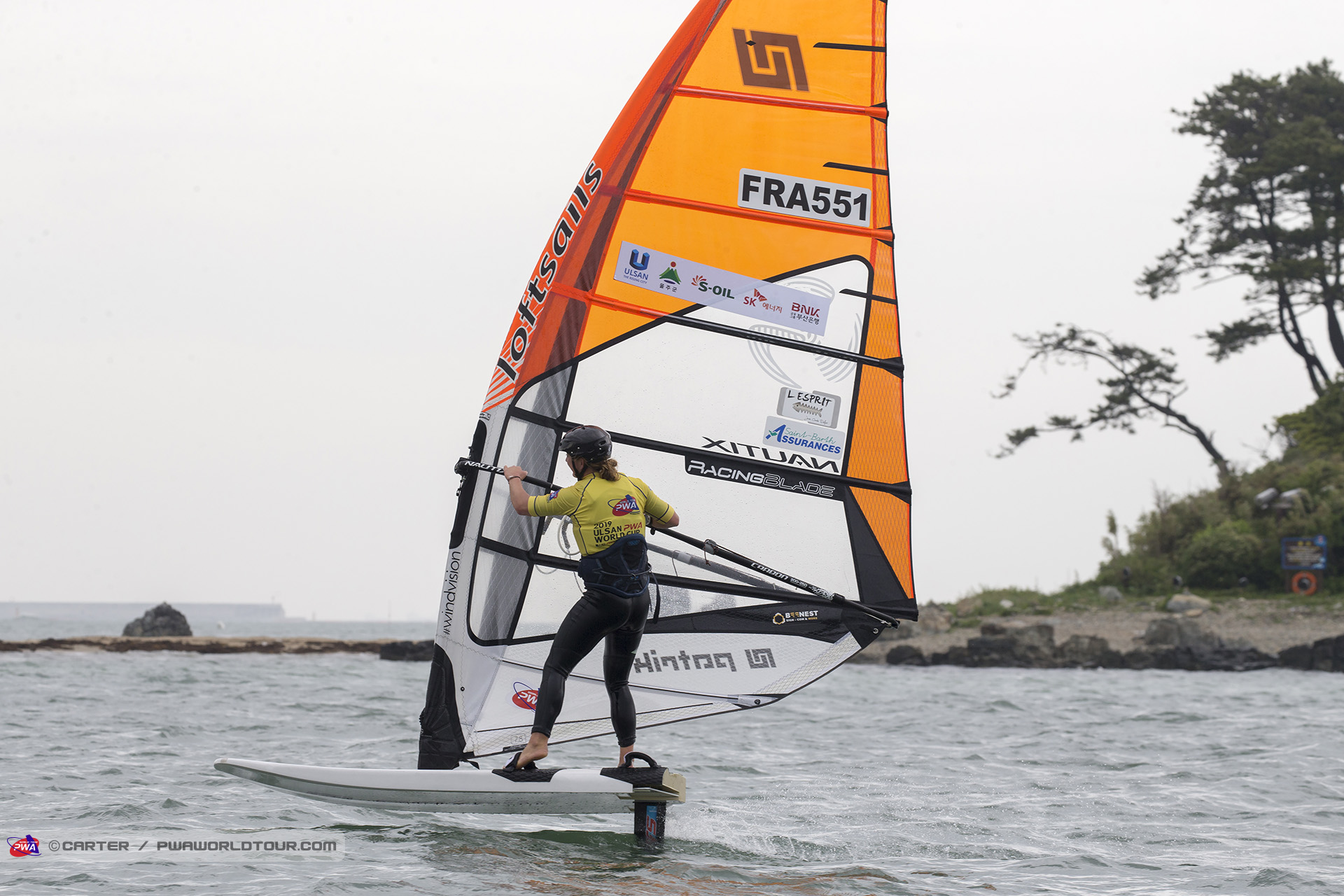 Marina Alabau returning in the shorebreak. 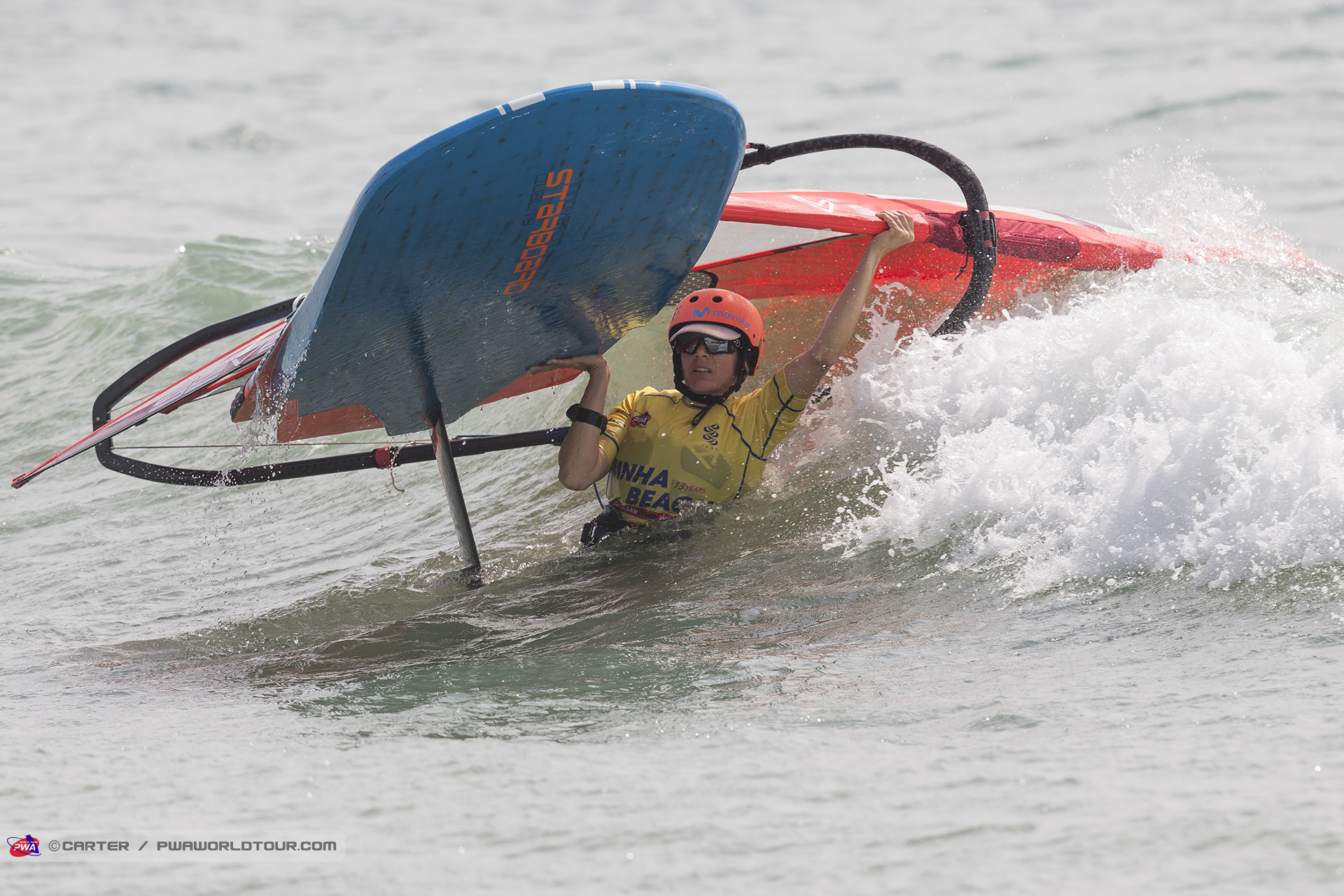 Matteo Iachino timing the shorebreak well on day 2. With a very bad result after being affected by others collisions in the first Event, he probably needs this event to produce a lot of good slalom racing to have a chance of getting back in contention this year. 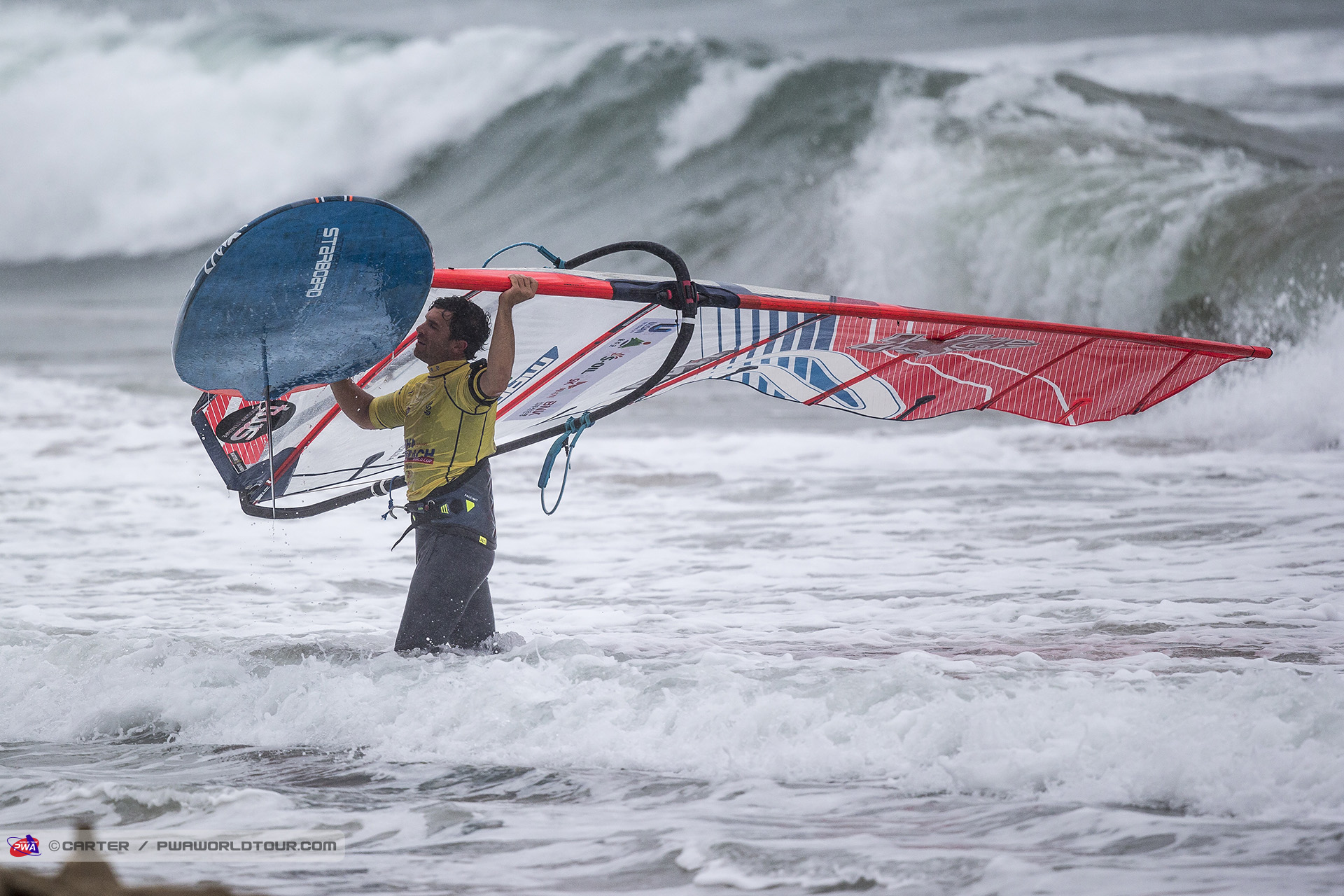 Ben Van Der Steen and most of the men got some time on the water when they tried to get a race started in day 2. Hopefully Day 4 delivers and the Slalom gets intense. 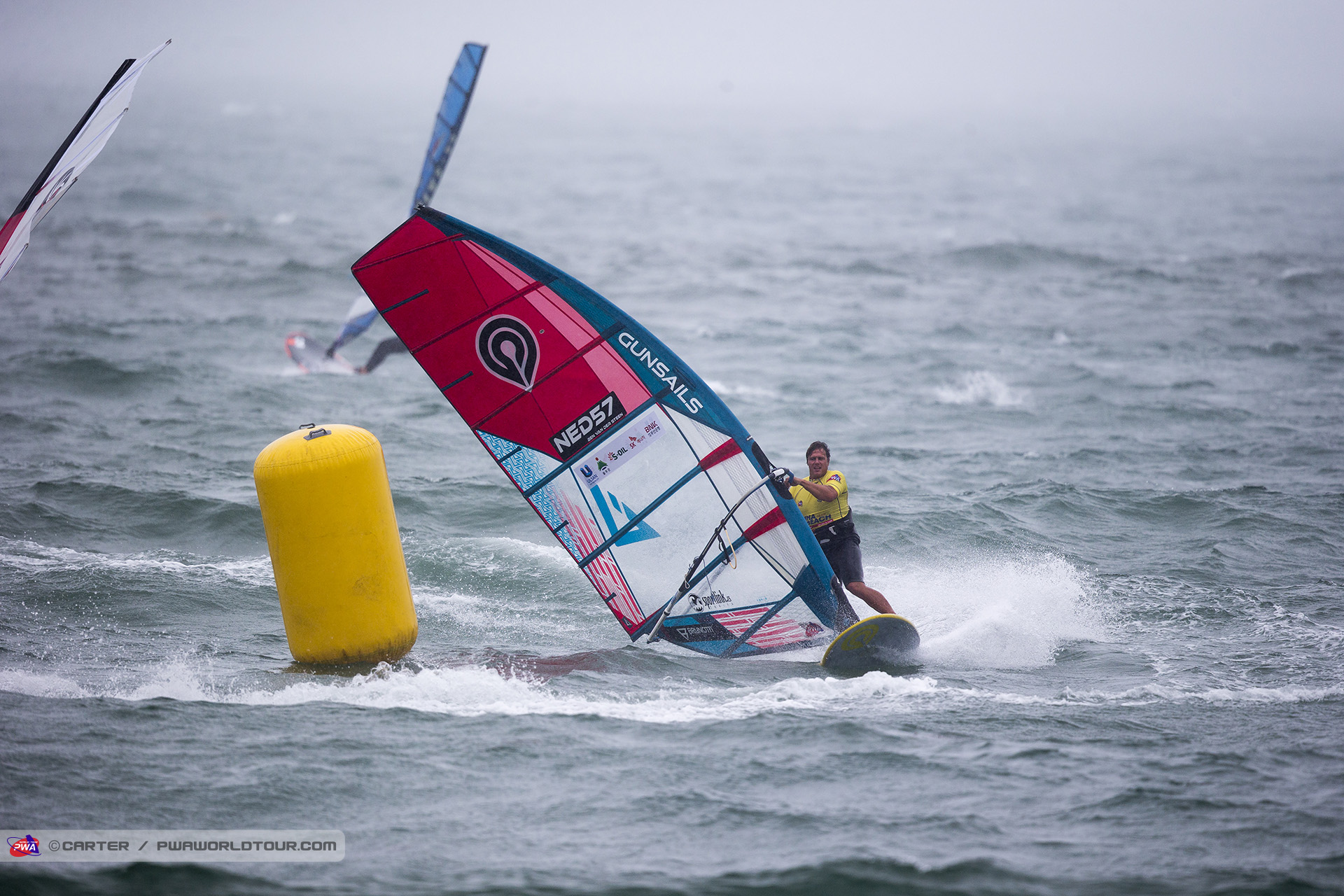 The Women's slalom sailors (apart from those that foil) don't seem to have had time on the water yet. Lilou Granier (having recovered from a wrist injury over the Winter) getting ready on Day 1. 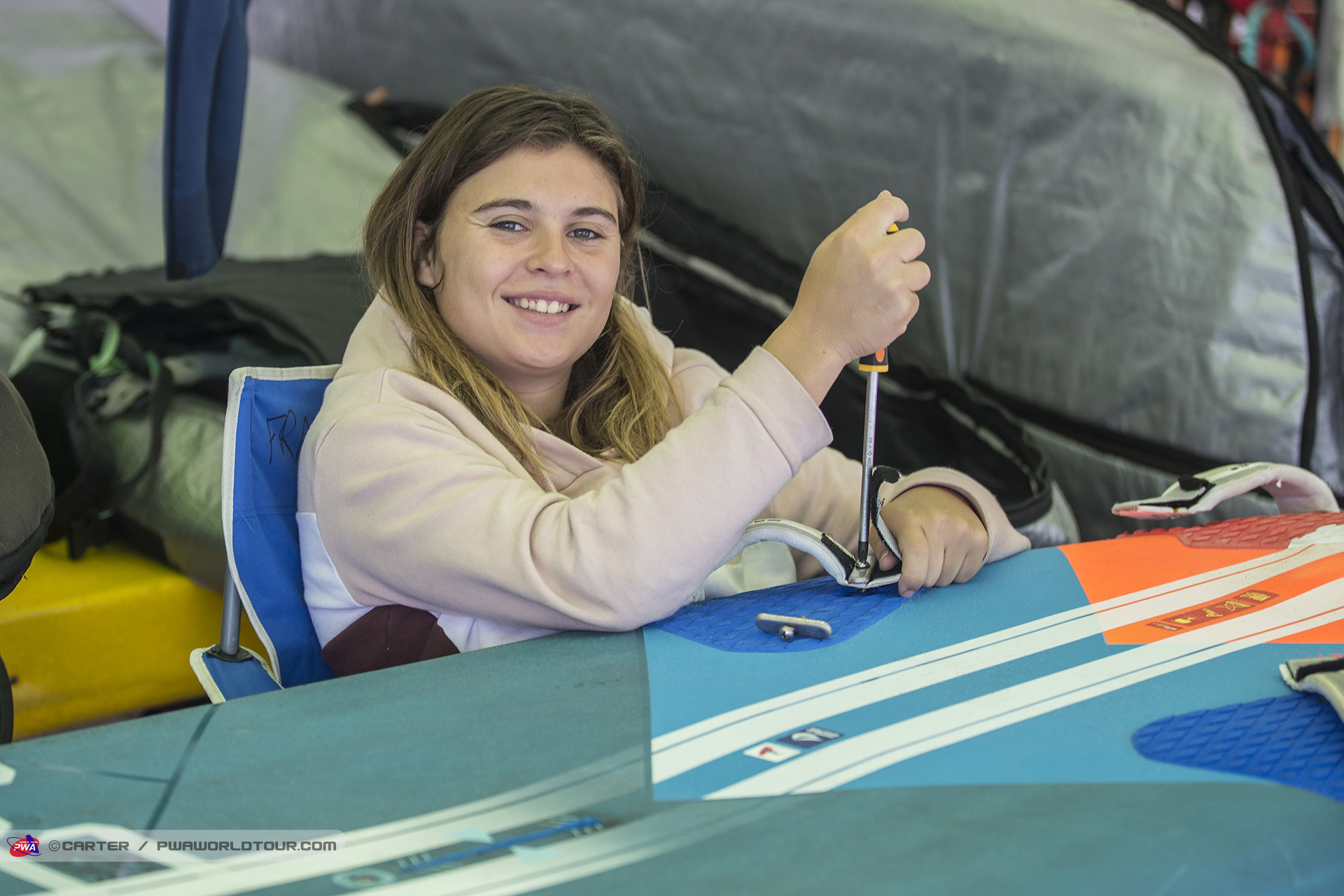 Another frustrating day for the Slalom Sailors, though the men did get 9 heats completed - eventually.

The day started hopefully with a couple of good Women's Foil races. Finishing Marina, Marion, Delphine meant that Marion joined Delphine in the lead of the Event. The second race finished Delphine, Blanca, Marion, Marina (who made a mistake and crashed). Good racing though and with the discard, the Event order is now Delphine, Marion, Marina, Blanca.

The men's Slalom is starting to look similar to what happened at Marignane, as with fickle wind, which was gusting, swinging and lulling, there were a number of heats cancelled (some of them numerous times). Several of the leaders after Marignane were eliminated in early rounds, including those in 2nd, 3rd and 6th place - and leader Pierre Mortefon still has to try to make it out of Heat 10 to get to the semi-finals.

One Women's Slalom heat was attempted and cancelled.

The sailors seemed to have a better chance of completing the heat if they were not bunched at the gybes, so maybe a longer reach to the first mark would space them more and give them a better chance of completing heats? It also seemed like the leaders usually fought harder to get planing again than those in a close fight for 4th to 8th. Kornum was a good example of someone who saw the others gybing tight and bogging down, and widened his gybe, pumped like hell and kept planing, only to have the heat cancelled.

Amado getting used to this Slalom game. 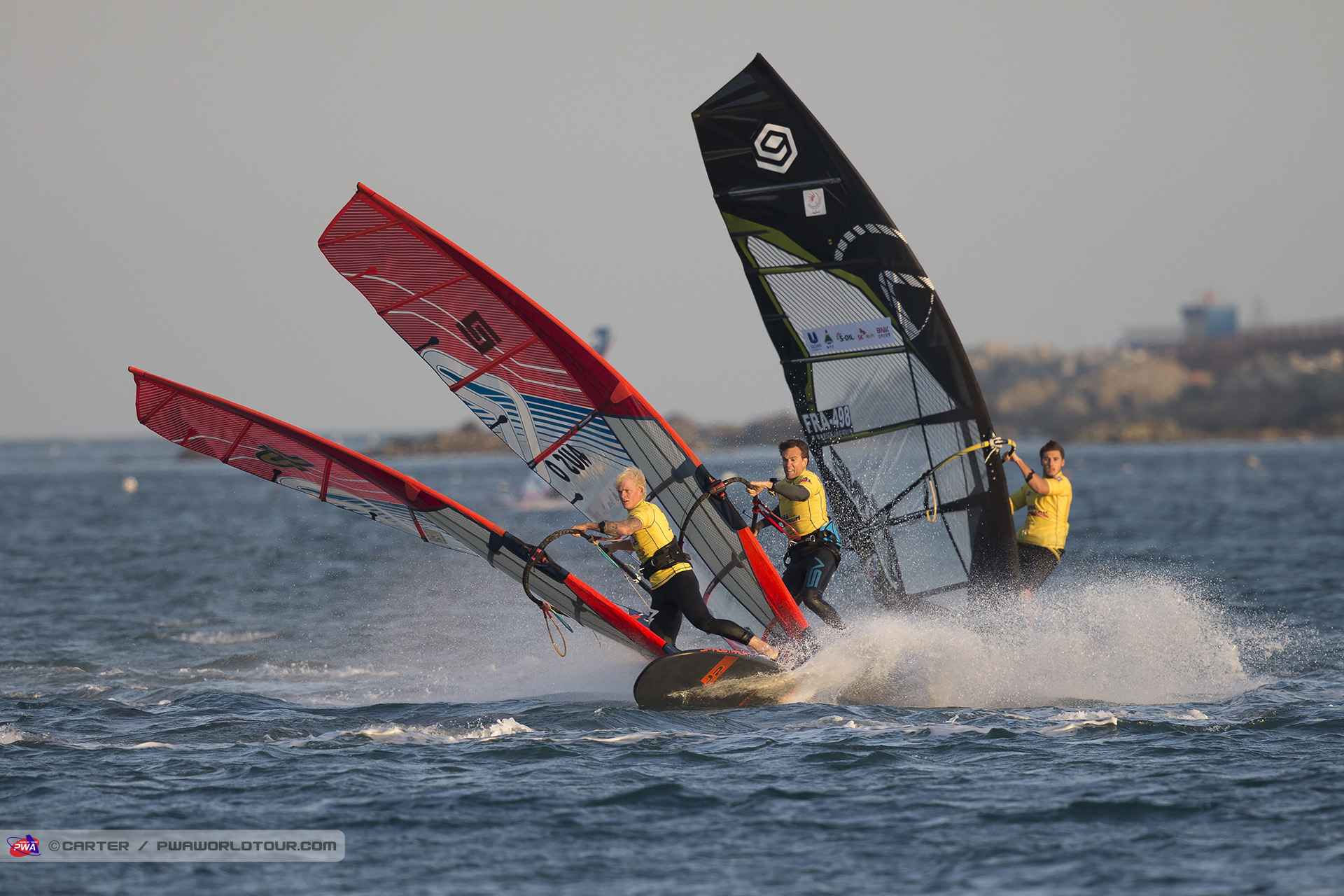 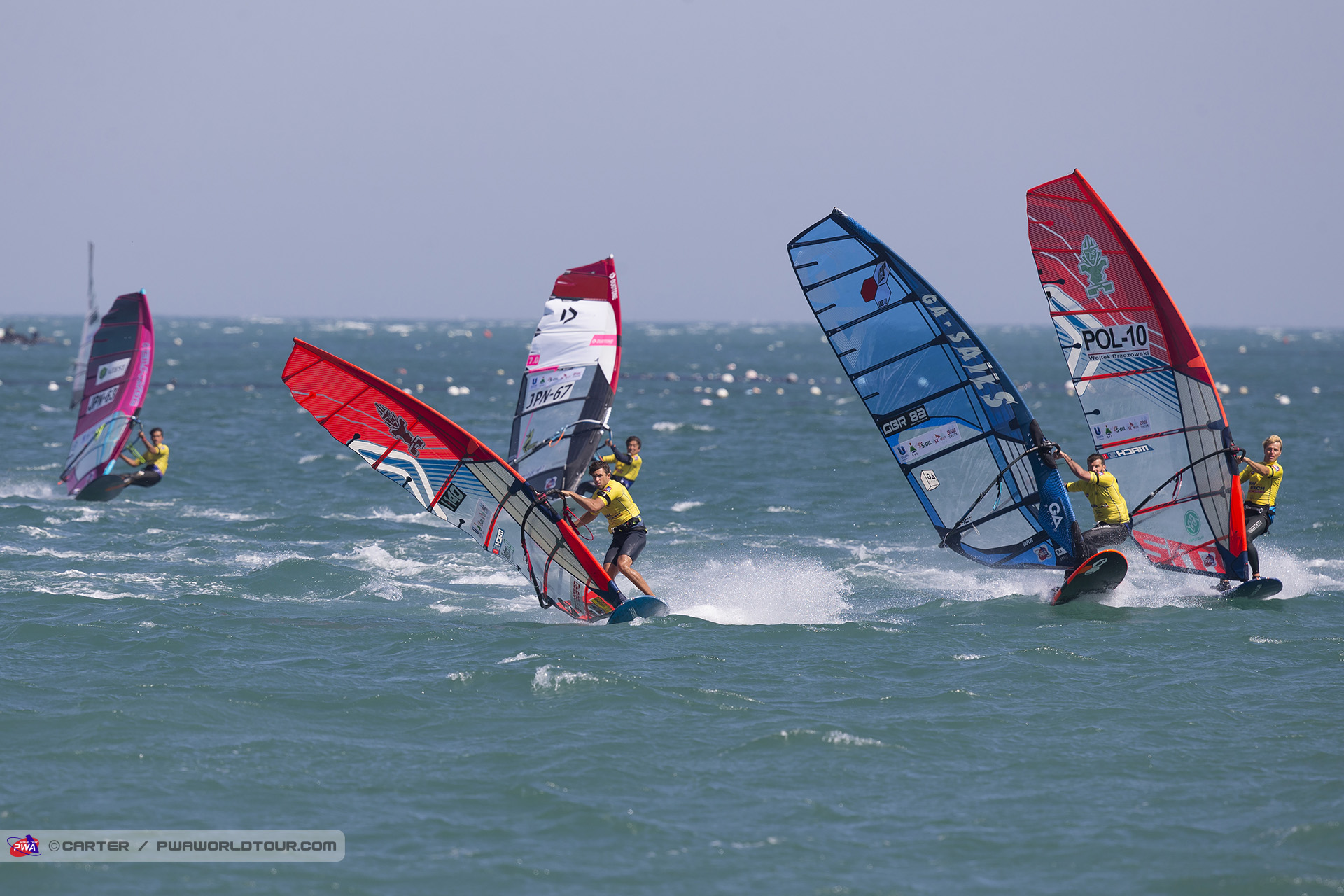 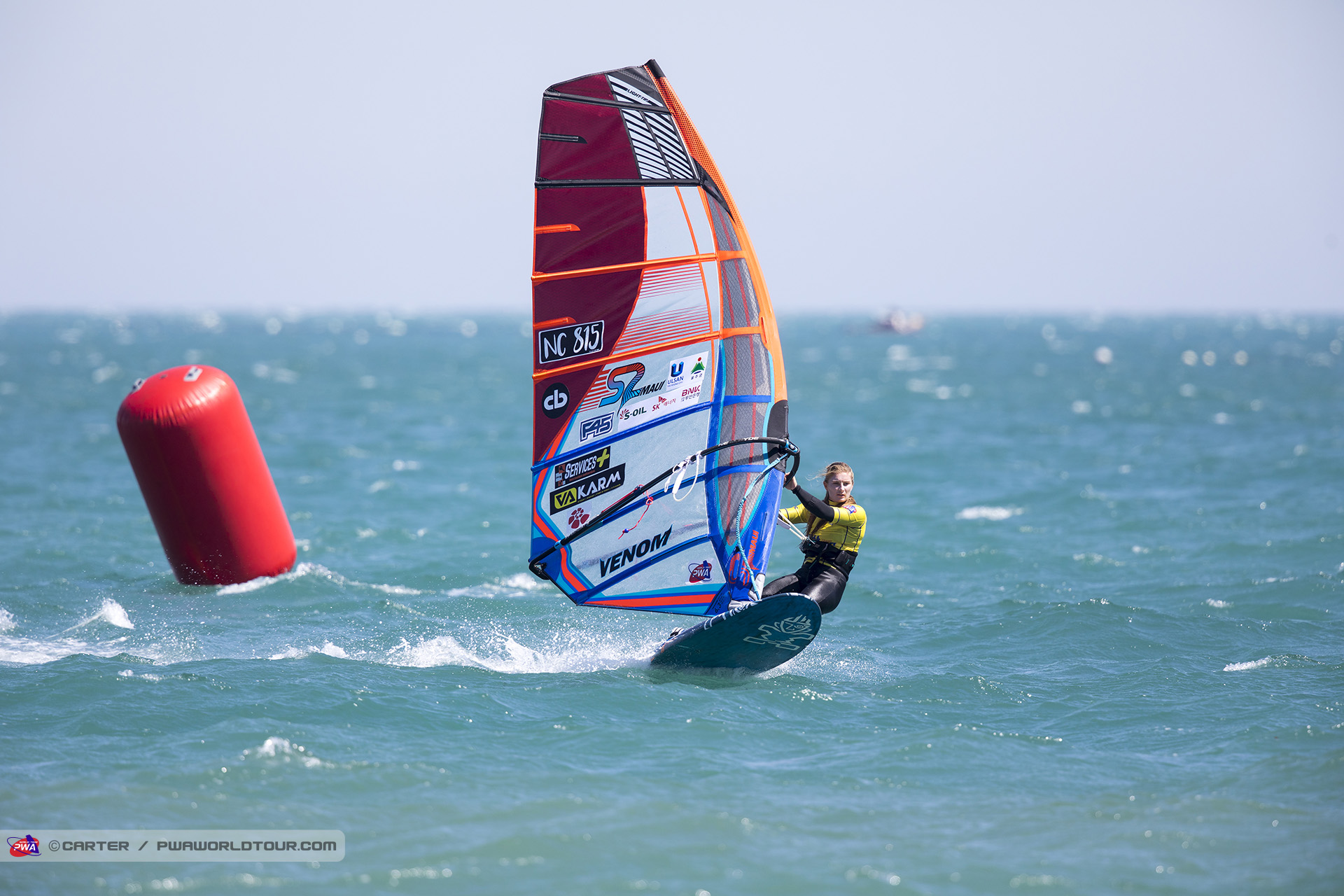 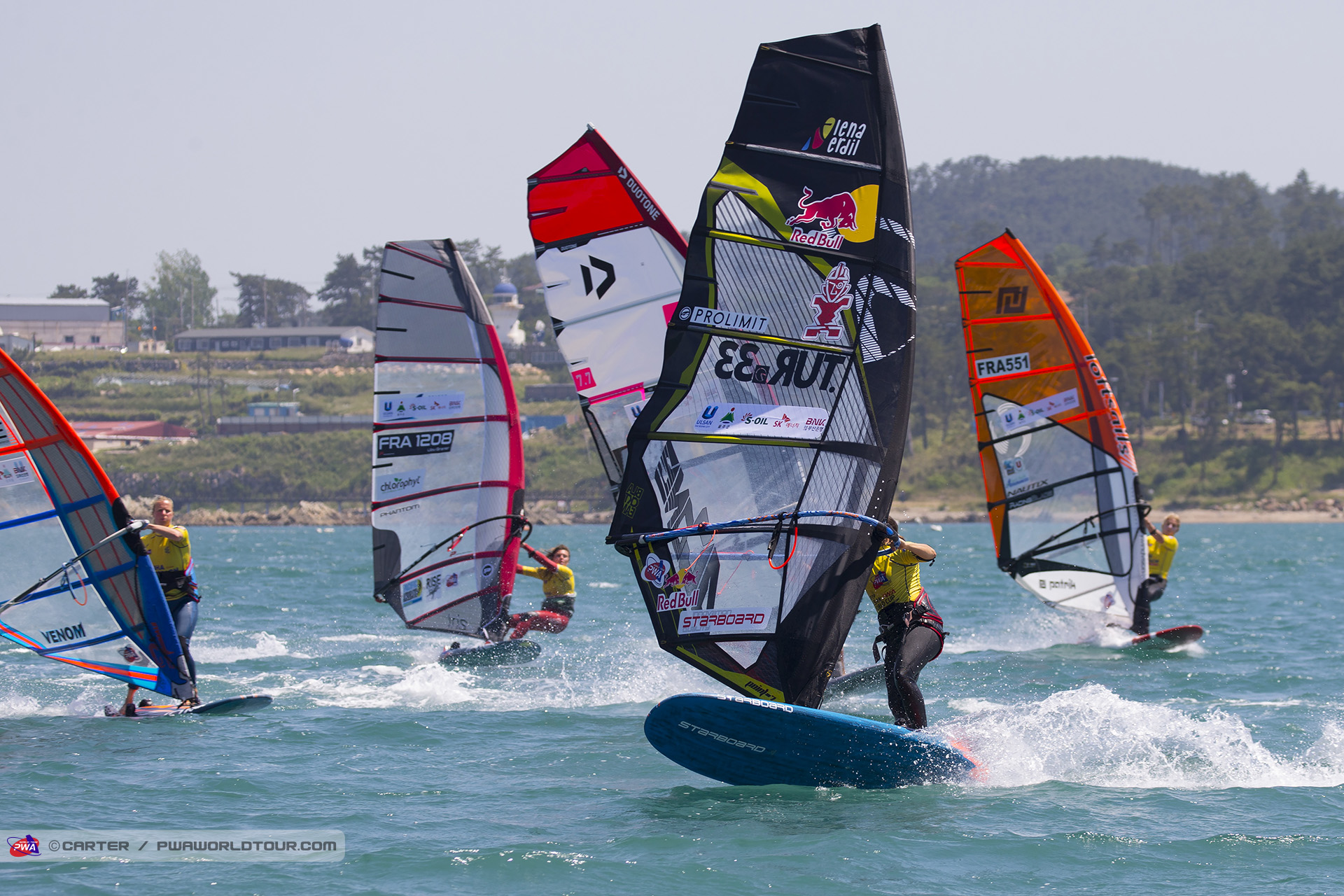 Day 6 promised little but the forecast was wrong and Day 6 delivered an EPIC day's sailing!

The day started with Women's foiling, which produced some more good racing and surprises. Marina Alabau seemed to have made a great comeback to take the lead in one race only to have the race abandoned near the end when the others could not get their boards flying again.
The course had been redesigned to use the Slalom buoy positions so there was a lot of reaching and very little upwind. That suited Delphine, who seems to have a higher top speed on the reaches. Delphine was the clear winner of the Event, with Marina in second place, but tied on points with Marion Mortefon, who was super-consistent in third.

Then the Men's slalom kicked off and it was one of the most unpredictable days racing in a long time. The sailors have obviously been training hard and well because many of the sailors were in contention and even slight mistakes were being punished. There were very few races cancelled and contenders surged to the front or were pipped from qualifying.

It was that kind of day! 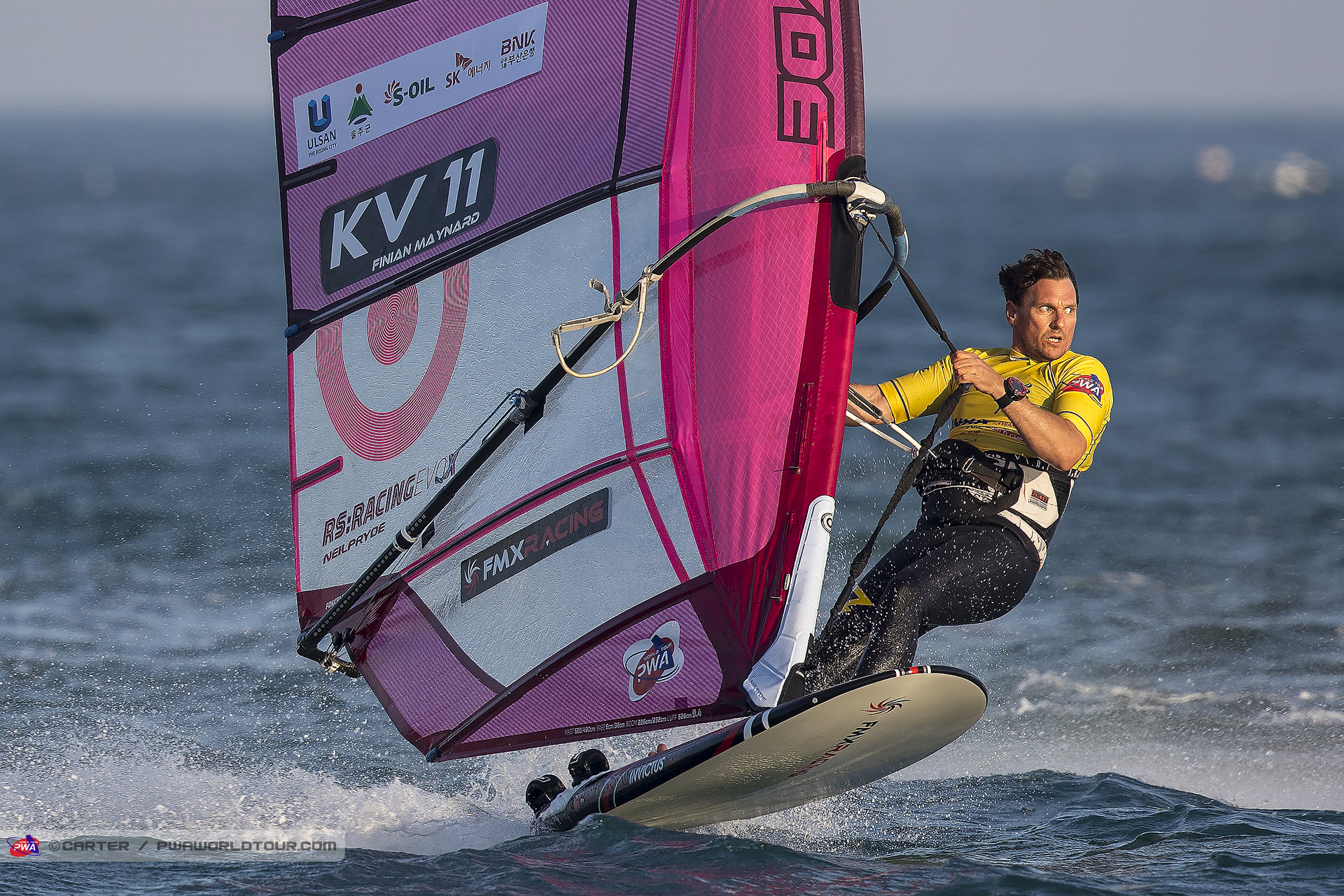 The racing and commentary were great, but unfortunately the drone coverage was way below what it should have been. If the show had been captured and shown from all the right angles, the content was there for one of the best slalom videos ever. If you have the time, it is worth following it from the recorded livestream. 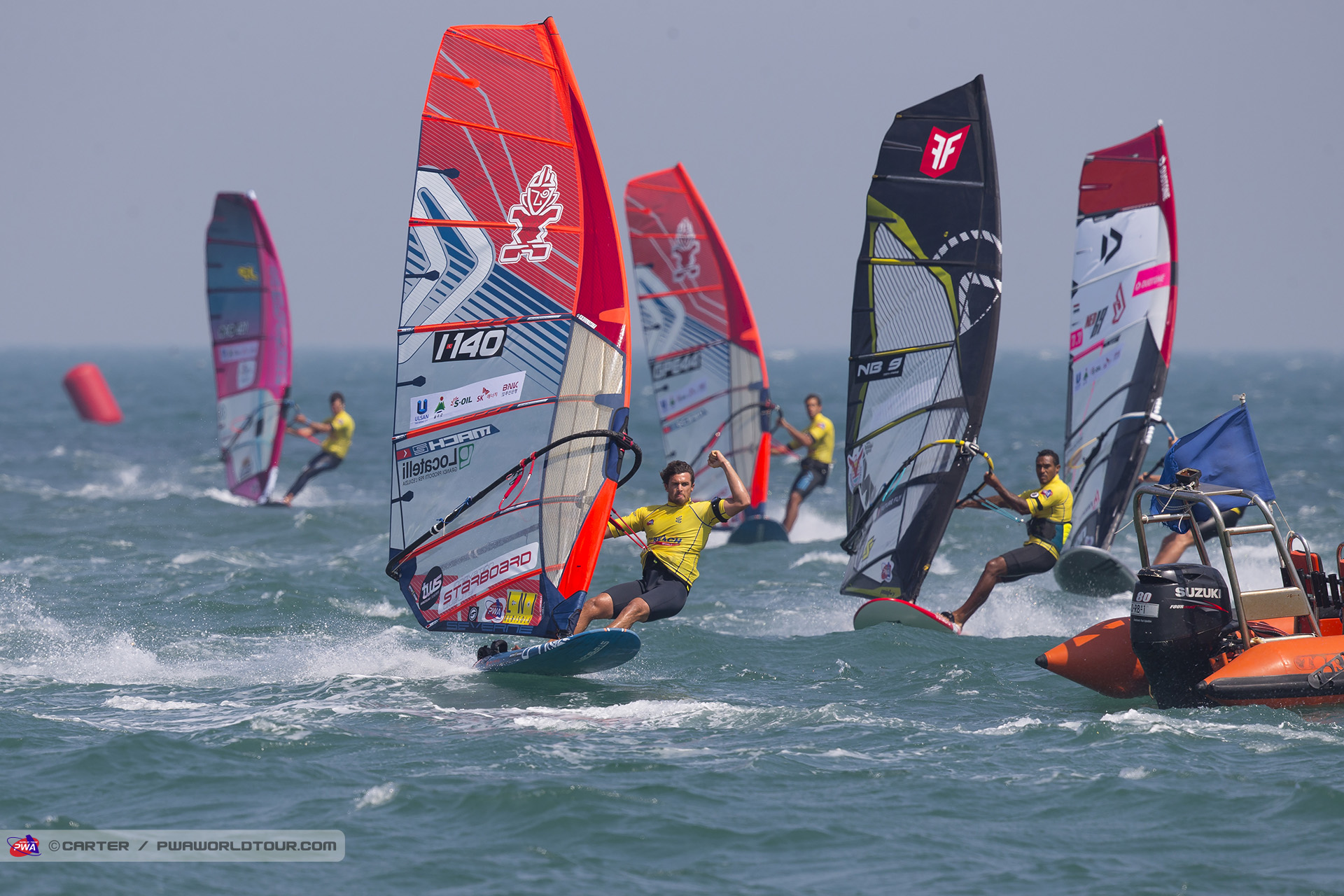 The Women's slalom was equally unpredictable. The wind was hard to predict, so quite often sailors were on gear too big for the wind, so sailors were on the edge of control at times. There were collisions, crashes, catapults, so you never knew until the finish line what the result would be. Lena Erdil seemed to still have speed ,but was struggling with the gybes (maybe her foot injury was taking a pounding in the conditions) and Lena dropped from leading the Event yesterday, to 5th place. Delphine had that extra straight line speed, which carried her to the win - closely challenged by Marion who was super consistent in the gybes and almost faultless in all aspects of her sailing. Maelle came through to finish 3rd in the final and 3rd in the Event, with Lilou just behind in 4th place in both. 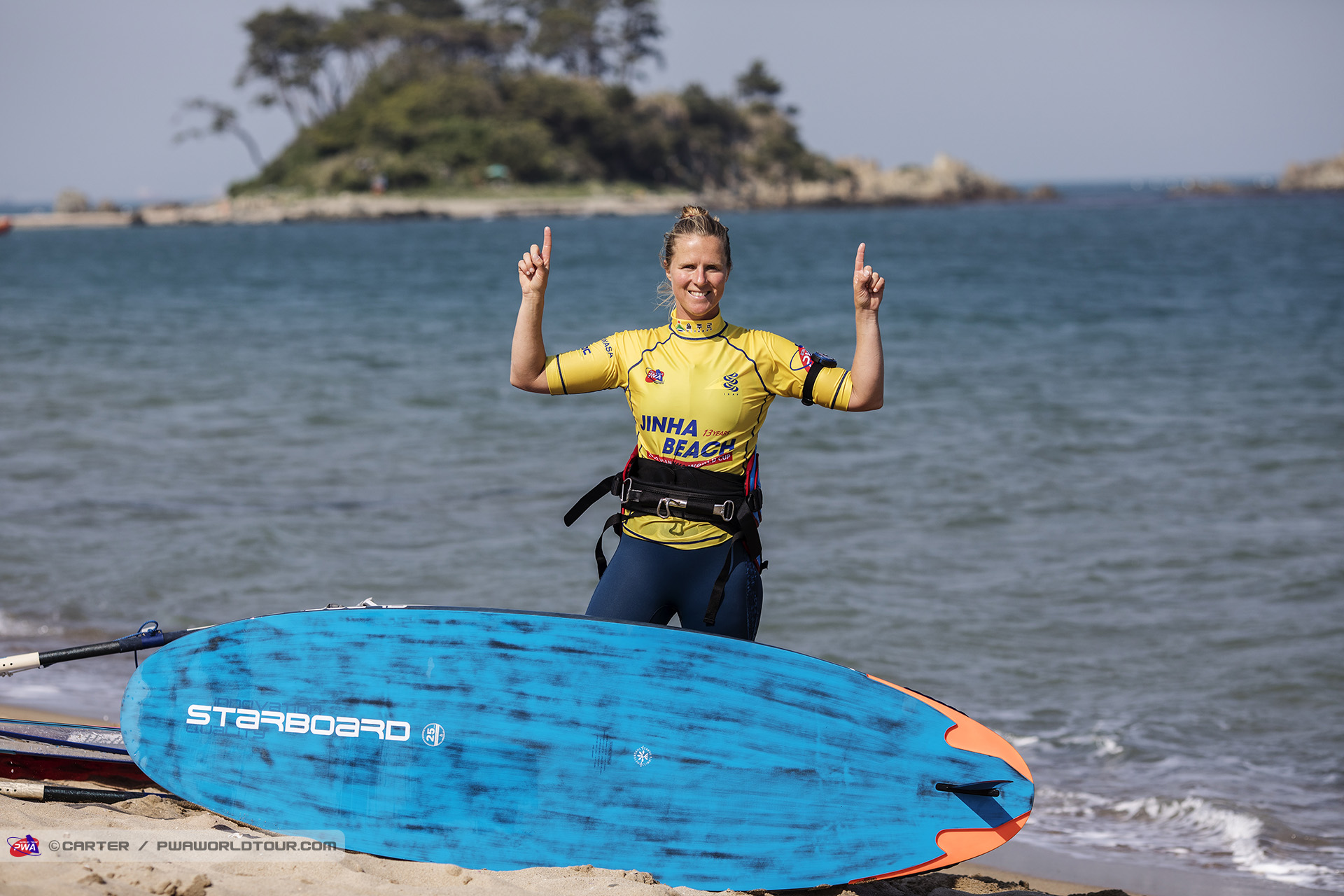 Follow up video after the event from the Alabau sisters.