He plans to get to a level where he can dock start and pump to the waves and then ride them along the coast without the support jet-ski.

What does he do if he falls off?
Top

He plans to get to a level where he can dock start and pump to the waves and then ride them along the coast without the support jet-ski.

What does he do if he falls off?

He has to paddle to the shore if he didn't have the jet-ski backing him up. Those waves are too powerless to get foiling again.

In Hawaii, some prone foil downwinders (such as Kai Lenny), paddle out at maybe Maliko Gulch and catch a swell then ride it 10 miles along the coast to (maybe) Kahului Harbour or Kanaha.
There is even a regular shuttle to take downwinders back to Maliko Gulch.
http://www.malikoshuttle.com/routes/

What is possible if everything is right.

Nicest day of the year! Friday was 6/5/4 Winter suit weather and today would have suited the shorty or 4/3 short sleeve if I had fallen in. I was wearing a 5/3.
I paddled and also tried the Synergy large hand paddles on my 204 by 27.5" (70cm) 115 Free Foil. They work fine for prone paddling (Dave looks like he is using the exact same paddles in the second video), but I found my arms were too short for them to work kneeling. I'm 171cm tall. My knees are not designed for kneeling - except on a full deck pad.

I would need to shave some width off the inner sides of the paddles, and would have benefitted if not wearing a wetsuit - like Dave Kalama. I have updated the photo showing where I trimmed the inside edge of the RH paddle, before trimming the LH. I suspect that Dave has a longer, narrower (on the inside) set of paddles for downwinder hand paddling while kneeling - and probably a narrower board? 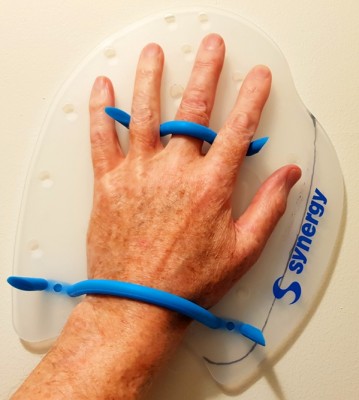 Prone boards are generally quite narrow.


Having tried the hand paddles some more - on the 70cm wide 115L JP Freefoil, my conclusions are:

The paddling on your knees doesn't work for me on that board, partly because of my knobbly knees, and partly because the blades hit the side of the board too much.

Prone paddling works and it is a bit more effective than paddling with your hands in terms of speed. I was interested in how useful they might be if you were self-rescuing, and I don't think they are much help for that, although I was paddling in no wind. If you were not too far out and were paddling against an offshore wind and small waves, they might be useful to overcome the wind.
It is very hard on the back of your neck if you do not do a lot of (in my case any) prone paddling, so my conclusion for me is that to self-rescue, I will just paddle with my hands, and try not to ever have to paddle more than 500m max.

I've ordered a Slick 6.5m, so I hope to use a cut paddle shaft as the boom, and plan to make a blade I can attach to the boom to make a paddle for self-rescue if I am going further off-shore.

I've been finding that winging causes pain from my two back problems, so I have been modifying a harness to use. It is an Ocean Rodeo Kite harness with a 12" Dakine Maniac sliding hook and Gun quick release clips. I cut the hammerhead kitesurf hook down to the crossbar and reshaped it and it works well for hooking in and out. I also bent the ends of the spreader bar more. When slid to the side, the hook protrudes very little and makes it easier to climb onto the board without the hook contacting the board.
I have also found that using the Oceanus reel leash is a lot better than using a coiled board leash (less tangling), and mount it on the slide rope on the back of the harness. 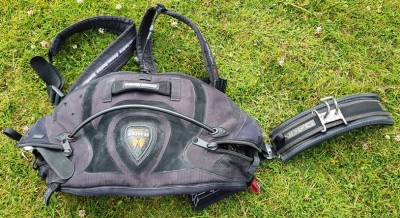