Where to get Simmer fins in Europe?

Windsurf equipment based chatter should be in here.
Post Reply
7 posts • Page 1 of 1

Where to get Simmer fins in Europe?

So I've finally got my self a second hand Cortex board and I'm eager to try out the different fin options, only to find that I cannot easily purchase any of the recommended fins around here. Does anyone here know of a good source in Europe (I'm located in Sweden)?

I do have quite a few K4-fins that I can play around with of course, I just thought that it would be good to start out with the recommended ones first.
Top

I always thought that generally after market fins were better quality than those supplied with a board. Purely because brands have to mass produce those fins and no one really buys a board based on how good the fin is so its an obvious area to cost cut.

I would not waste to much time looking for the exact fin that it came with, but something similar in terms of size etc then yes look at what it is intended to work with. And with multi fin some side fins are straight and some not in terms of the alignment to the box. There is masses on here about toe in and Ola has posted his thoughts - worth looking for that and reading up.
Top

Yes, I guess I could always talked to Ola directly for tuning tips. I haven't sailed or talked to him for quite a while though, since we moved to different pats of Sweden.

To me the stock fins looks fine, looks to be mainly glass-fibre with a few carbon fibre layers sandwiched in there as well. Gives them a slight flex which is nice to have on a waveboard.

Some brands seem to team up with MFC and provide their boards with good fins, while the some of the Drake fins that came on the Starboard boards were not always that good.
Top

Which size Cortex, what is your weight, sail sizes and type of location?

I wouldn't really hunt around too much for the original carbon fins as aftermarket fins as they might be a bit hard to get by.
Top

I didn't use my real name when i registered here, but I'm the person who bought the EVO 62 from you in Apelviken quite some time ago now.

I have had my eyes on the Cortex 84l for quite some time to use as a lightwind board, but the price and lack of space at home has stopped me. I then got a good deal on a used 90l (former used by Gustav at Surfers), and couldn't stop myself. My wife tells me that I will have to get rid of another board though, one in and one out is the deal around here...

I'm really lightweight (at around 65kg) for that board, but my home-spot is in a lake, so I'm hoping this board will suit some lightwind 5.3 sailing here when I have previously been on an 86l single fin board (Goya One). This then complements a Starboard Quad 77l board, that I can use about from 4.7 down to 3.7 weather.

The stock center fin was not included with the Cortex, so I would have liked to try one before playing around with other fin set-ups.
Marcus adviced to use K4 Scorcher 20cm, so that is what they included, but I think I can drop down to a 19cm one instead. I have only had the chance to sail the board once in Apelviken and had a great time, what an easy and reactive board! Really good speed on the way out and full carving turns on the way in, I have never had such an easy surfing/carving feeling before. One can just focus on the wave and where one wants to go, the board kept the speed in the bottom turn and then makes a full carving cut-back on its own.

I think for my home spot that I will like to set it up a little more snappy, the waves are really small and slow. Will try with a slightly smaller center fin and also move the fin further forwards in the box. Or perhaps a twin set-up is the most snappy set-up?

I have a few more K4 fins on their way in the mail and now I just need some wind to do some testing. Below are two pictures from last sunday, no action ones though as my wife was too busy doing other things... 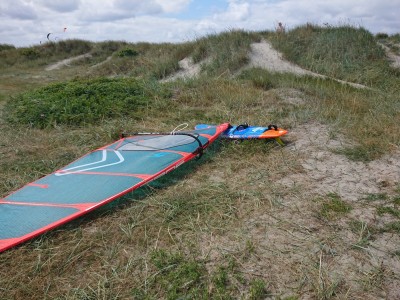 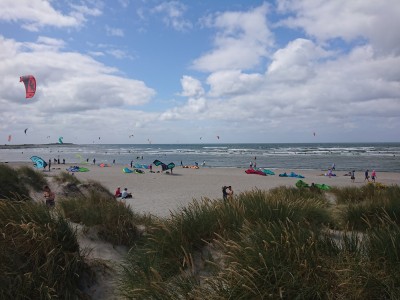 Aha! 65 kilos is quite light and it's gonna ba a super floaty board for you. Actually, for lake sailing would consider a twin setup, like 2x16 or perhaps 17. That will push up the nose a bit and has less drag than the thruster setup.

For wave sailing I would get the K4 Ezzy 1 deg 10cm or perhaps the new asym Incinerators (A.I) at 10cm. 19cm center will be enough for 5.3 for you, and with smaller sails you can go down to 16 at your weight.
Top

Thanks for the advice, I have two 17 incinerators to try out as a twin, and some Ezzy front fins that I can try for the tri-fin configuration. Looks like we will get some wind tomorrow, so it will be fun to try out a few different fin-combos at my usual lake spot.

Yes, indeed it is super floaty for my weight, as even when stationary I can easily float on a 77 liter board, so I'm not really after any more volume. But early planning (on a 5.3 sail) and keeping the speed through turns in slow waves is what I'm after.