I have the Ensis Pacer 2000, you are correct it is a rebranded Moses . A truly lovely thing.
I have the 2000 and it is great. I will get a smaller front wing at some point but am loving this one. Fast and sooo glidey ( made up word).
You won’t be disappointed.
Top

A comparison of the Echo and the Slick.
Dominic seems to do quite comprehensive reviews.

I had my first go on the Ensis 2000 yesterday. Conditions were maybe 12-13kts so 5m/i76 windfoiling conditions.

It got going fine in this strength of wind. I've done my shoulder in so couldn't pump that hard, but it still got flying. It didn't feel slow given the size.

The shorter fuselage makes it a lot less stable in pitch - so much easier to pump and change pitch angle.

It required more foot pressure to turn, and wouldn't be so good for tight turns on waves, but I plan to get a smaller front wing for this. If it is banked it is a lot harder to get back to wings-level. Trying to stop whilst foiling, if you do my usual technique in the shallows of turning up wind and letting the speed drop off, it almost goes around 360 still foiling! This does make it a bit scarier to use, along with it being much wider and with sharper wingtips.

Here is my old i76 compared to the Ensis: 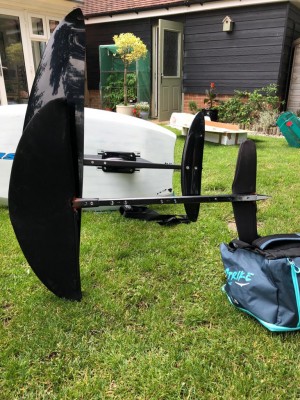 When you get used to it, that pitch instability gives you great manouverability .
I like mine more each time I use it.
Full foiling tacks and 360s are easily achieved with this amount of glide.

There is a limit of how tight you can turn with such wide wing, but almost any ripple becomes rideable with it

With a smaller frontwing like the 950 you gain a lot more speed and more maneuverability.
It wont turn as tight as an classic style wing but because you are gong so much faster you don,t want that anyway (and an classic style wing wont turn with that speed either).
Wednesday we drive to Viana, hopefully we get the conditions over there to try the Balz799 with 1100cm2 surface.
Top

I will be interested to hear how you get on with that. Keep us posted .
Top

Almost identical kit to Tim's arrived this weekend: Naish 95 and an Ensis, but went for the smaller 1700 foil, kidding myself for now that one foil can cover 12knots plus, without changing front wing at 20 something knots. All looks great, but a slight technical hitch and waiting on the M8 bolts to fix it to the board, I think they should be 35mm long?

Have managed a couple of afterwork wing sessions this week and really looking forward to seeing how the new kit works out. That might explain the rubbish Northerly winds next week.
Top

My second session on the 2000 today, and I'm getting more used to it, and really liking it. It handled 20kt+ gusts nicely without feeling far too big.

I am very tempted to get the W799 to pair with it. My thinking is that I'll be using it in more extreme conditions, and it looks a lot less like a dagger than the 940-950 wings, so I'm less likely to impale myself. My only worry is that it will be too big a gap to the 1100?
Top

It was 5m well powered, I think could get away with 4m as well.
Started of with the 950 and with 2-3 pumps I was up the foil and thats nice.
I used it last week with my 4m in 30knots..works well.
The 950 is a really good glider but need a bit wider turn because if you go too short you will lose grip. And with this, like you are standing on ice, bang, grip completely gone. With the wider arc that is still tighter as the 1100 it keeps going and is a LOT faster as the 1100, better to control.

Out of curiosity I changed to the 799 Balz.
Get going: in this wind the same as the 950 and I didnt had the feel I was using a smaller foil.
Speed: feels slightly higher, but when you flag the foil to ride some bumps (on a lake so chop) I have to see on the Sea what that does in the waves.
What is really different is the amount of grip you have and the maneuverability. The Balz has soo much grip, I was really surprised how different the foils are, you can make tight snappy backside turns and the jibing arc is like 3-4times as tight..and coming out with speed!
I ride strapless and i,m not a jumper, but the foil has a playfulness that make you wanna jump, so next week i,m gonna try straps to do that

Windrange wise, as far as you can say from 1 sess with 5m, it looks pretty similar where the 950 has more glide and the 799 turns really really tight. From what it looks like I see no issue, using this in 30+ knots.
I,m really curious how well it glides in the swell because that is where the 950 shines. If it does that well, he 950 is obsolete for me because I,m pretty sure that when the waves get steep and more powerful the grip of the Balz will be allowing me tigher turns with a lot more grip as the 950 can handle.
(The 950 makes more wide longboard kind of flowy turns where I expect that the Balz can get more truly surfy with tight hacks).

Sorry for the lame pick, I hope that next 3weeks there will be conditions to shoot better ones 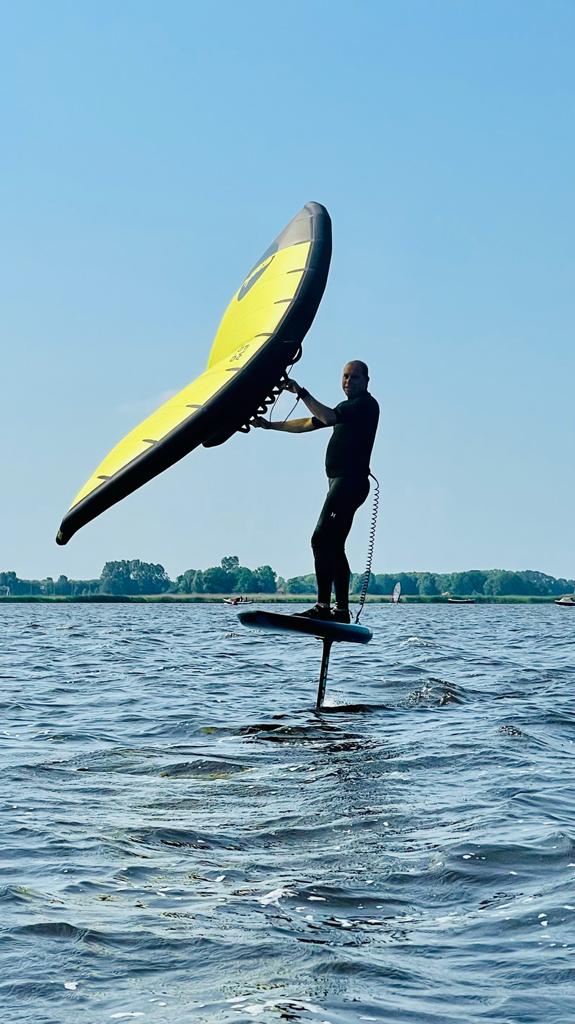 That's really helpful to understand the crossover between the foils.

For now, I am glad the 1700/950 is more about glide than tight turns. The wing ends are very pointy though, will need a bit of TLC on the beach and I don't even want to think about a wing versus foil clash.
Top
Post Reply
173 posts