I sold my Naish7.6 4 in1 Hover with foil wich was a nice board but I wanted to go wing while it is doable on the Hoover 7.6 it feels lonmg and draggy with a wing.

At the same time I bought an Go foil set with a Maliko280+200+Iwa for a very nice price. I know there are newer faster foils, but I used both Maliko and Iwa and they give a LOT of lift and are above all very easy, controlable and very well made. Now I ""only"" need a board and 1 or 2 wings.

Anybody who tried one of these as they all look very short and Thick and wonder how esy you get on them in swell/waves/sea.

Wings:
I,m a big guy, I liked the Duotone Echo but the Ensis looks very cool too.
Tried Naish and although they look nice I was struggeling finding the right loop and found them tight for my hands.
Slingshot is also an option but the word is that they are rather heavy..
Any clues, experiences??
Last edited by Jeroensurf on Sun Oct 11, 2020 6:20 pm, edited 2 times in total.
Top

Hi,
I'm 90kg and use the Gong 5'8" with 110l. I find it perfect for my size on the open sea and have not ever been on flat water. Width is a fair consideration as its more likely to tip rail to rail than fore and aft. I was after the shorter Fanatic 2020 which was 95l and the biggest they did , now they have i creased the range. They do look the most developed with raised pads and carry handle positions. I think you would be OK on 110l, easy on 115 if it was available.
Wing wise I would choose the Duotone Unit if I were to purchase now, the boom on the ECHOis ok but I didnt like the way the wing seemed to twist in my hands due the dihedral and it seemed to roll over in the water more. When waterstarting it's harder to release from the water,like trying to waterstart along boomed sail. The tail end can catch as it has no infatable centre strut lokeevery other model on the market.
Top

Thanx James!
So 110l and puit some work in it

I will definitely rethink the boom and start reading about the Unit.
Main problem for me with the Naish was the width of the handles, but Duotone seem to have a wider grip.
In that respect I really like the Idea of Ensis with the handles and the ability to ad a boom.

You could look at the new Cabrina wing which has mini-booms?
Top

I have the ozone wasp 6,m was out today in nearly 20knots and it was fine. And has loads of low end grunt too. And is smaller wingtip to wingtip than the unit.

Nice handles and handling too.

I'm going for a 115 Quatro Wing Drifter when it finally arrives.
Top

Going 6.30am for a wing so need to sleep but will report back after with more details or ask.away
Top

Very interested in your findings with the Unit Northy.
The shop I buy my gear nowadays is from a friend (was a friend before he opened the shop) and he doesn't do Ozone but Fanatic/Duotone /Starboard/Airrush/ JP/Pryde/Naish and can get his hands on Ensis as well.
He helps me out all the time, lend stuff, fix stuff, build custom sups for me etc. We discussed other brands and he doesn't care what or where i buy but it feels not right to try his gear and then shop elsewhere.
Top

I tried today with my buddy who has a shop the Skywing 5.8x28x110l, the Starboard Wingboard 6.7x28x115l and the Skywing 6.0x30x130l on a gusty lake. Mind you that i,m 95kg, that I have only a couple of Wing-sessions and are really learning it so this is rather a beginners view as an intermediate.
The Fanatic Skywing 5.8x28110l with the Go foil Maliko200 feels very tippy to climb on when you wanna go from kneeling to standing, but once you do its just fine. With it sizes you can,t call it stable when floating, but it was okay and once flying it is a really fun board with lots of control.
The only down-trade: lots of swearing when getting standing in the chop.
The big surprise: if you aren,t quick enough standing on up, you are foiling on your knees and that is actually pretty funny

Because the Skywing 5.8 feels tippy I tried the Starboard 6.7x28x115l.
Sitting on it and tanding up it felt immediately a lot more stable. the extra foot length makes where you sit less critical and standing up easier.
Once standing the deck felt less comfy as the Flywing and I was looking where to stand all the time as small adjustments didn't had any effect.
The draining channel makes sense on paper but in reality it seems to be a problem for a problem that doesnt exsists, the Fanatic doesnt has them but didnt hold water either.
The Starboard fe;lt a lot longer (duh!) when flying, but somehow I almost stepped of the back of the pad, also due the lack of a kickpad.
Overall I was not impressed/almost a bit disapointed as it looked a really nice board!
The guy who owns a shop and and is an good winger noticed the same. Both found the Starboard more stable when not planing, but as soon as you are flying the Fanatic was a lot better and more comfy.

Skywing 6.0x30x130l...simply too chunky. It isnt the weight because the difference between them in rather small but the extra width and volume does ad float but no stability for my weight. I was literally floating ABOVE the water making it less stable.

In the end I bought the skywing 5.8 and think/hope I grow in to it and didnt wanna buy a board that I outgrow within a couple of weeks Rather a bit harder work at the start as needing it to replace at spring, and the hard work is only at getting balancing to get standing in a nasty short period chop from any direction!. I sup boards with this volume so I think it is just a matter of putting some hours in it and getting used to it.

Wings: On advice from my pall the Echo 6.0+4.0m without trying the others. He tried a lot and knows me very well from surfing, sup and windsurfing and how I ride and in his opinion this wing suits me best. He could order an Ensis to demo, but overall most of the times he is right and I really liked the Echo so why bother 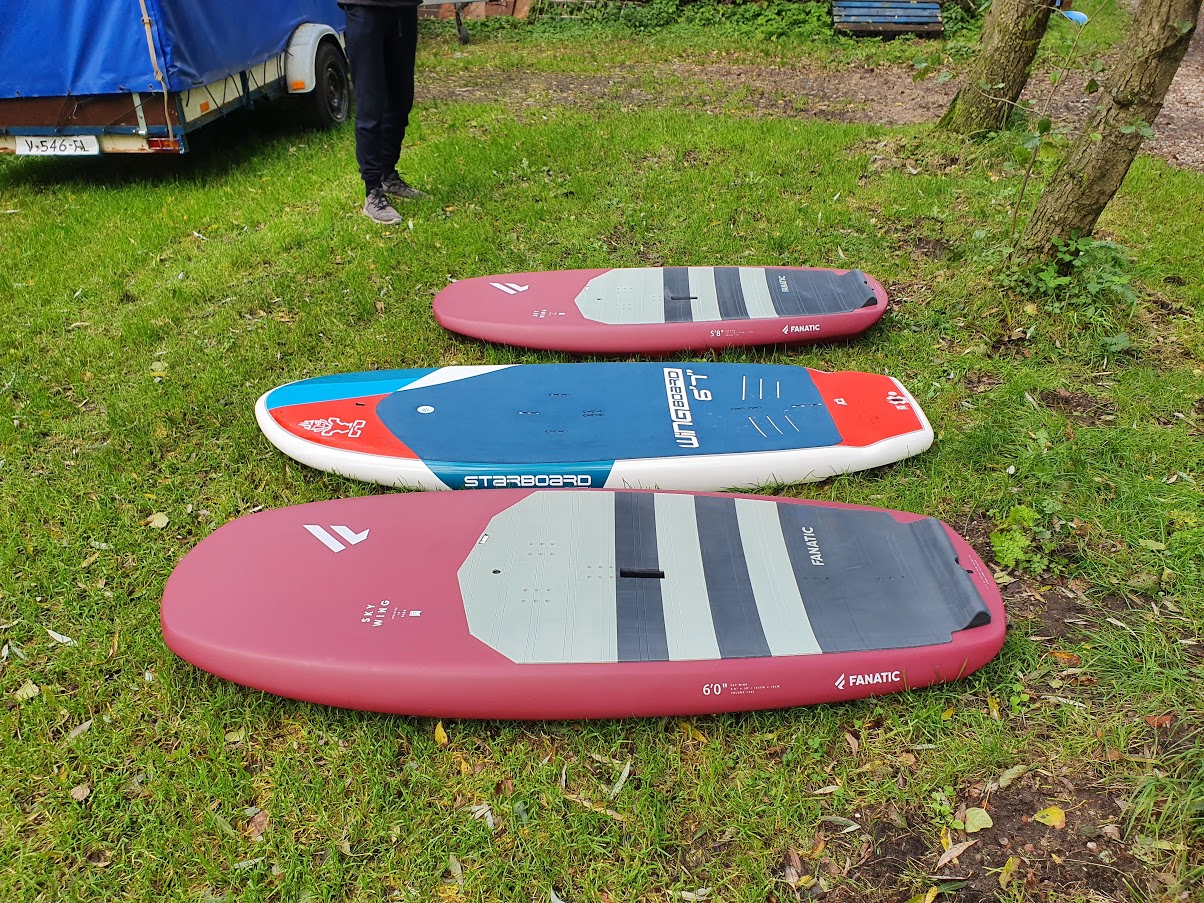 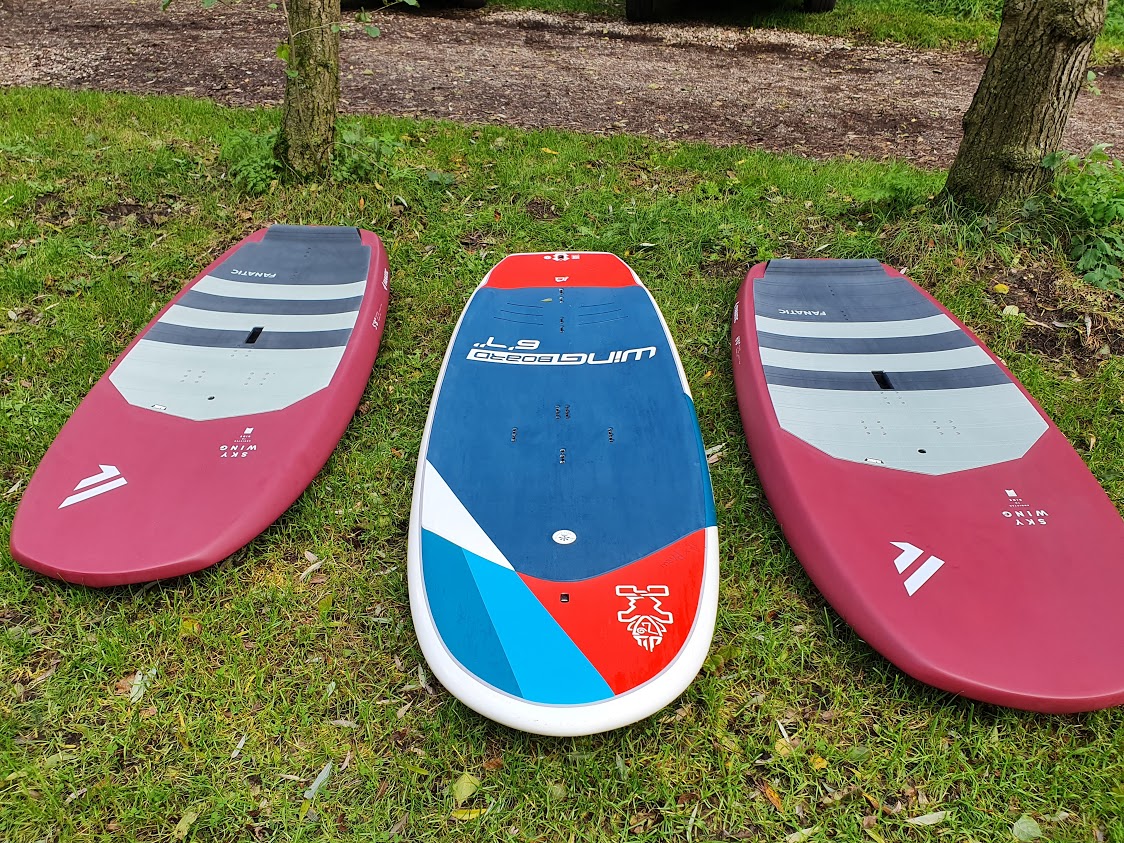 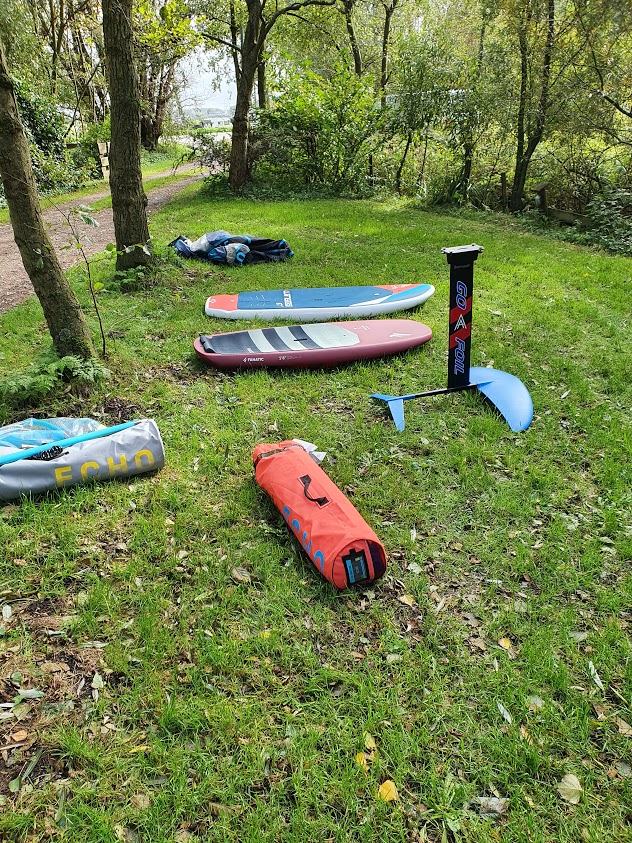 looks good Jeroen - love to hear what your pal says about Echo vs Unit...ive only used the Unit from Duotone (and a few goes on wasp and cabrina and naish)

Your are right IMO to go as small as you think you can to stand up...@90kg i went Naish 110 over their 125 and im glad i did.
(there was no larger fanatic dedicated Wing board when i ordered mine..it stopped at 5'4 95...and then the SUPs)

ps
keen to hear whern u add straps what configuration you will go with ie 2 or 3?
Top

Unit: He found the Echo more powerfull and stable. The Unit depowers better but we have very slow waves and it is easier to regrab the boom as the handles when you need an extra pull to keep going on the wave.

Straps: I don,t like to jump and love the strapless more surfy/sup-feel so for now I try to stay away from them.

the Naish 110 seems to feel a bit more agile and slighty thicker tail and lower volumed nose. In his opinion one of the best boards he tried. Owned one but sold it and waiting for the new one). I tried that one as well 2months ago and for me the lower volume nose made starting with my 5kg extra lovehandles a bit more difficult as with the Fanatic.
Top
Post Reply
173 posts