What size/model is your Hypernut? Do you use the tuttle box at all? Have you shimmed anything to get the foil more level rather than following the rocker?
Top

It’s an 8.0’ original 4in1 (I think they altered the boxes on later models? Could be wrong) and I used to use the Tuttle box but found that it was better to move the Slingshot foil forward a little so switched to the US boxes. No shims, just added a thin rubber gasket to the foil plate because the rocker on the ‘Nut is not flat under the plate! Seems a stupid to me but that’s the way they built it I guess.
It rides a bit nose high with both the Tuttle and US boxes but this doesn’t bother me much.
It doesn’t play nice with the AFS foil but works well strapless with the Slingshots for both Wing and Wind.
I use different mast positions for the different disciplines.
Learned a lot on this board, and it’s a sweet SUP surfboard.
But now I want a smaller board for Wing foil. Will keep the Nut for strapless Windfoil and SUP surf foil
Top

Farnorthsurfer wrote: ↑Sun May 23, 2021 8:42 pm The 1100 should work at the same mast position as the design will ensure that the Centre of Effort is the same distance from the mast for each size foil wing.
You can see this with the Slingshot foil measurements.

Nah this is not right, on my slingshot i84 and TC68 the CofE is in entirely different places requiring the foil to be moved (or for the rider to change stance or foot position).
The length of fuselage also changes the CofE, with a longer fuselage (counter intuitively) moving the CofE forward.
Top

A longer fuselage means a greater distance between the centre of mass and the stabiliser. (Moment = Force x distance) The stabiliser is what creates a nose-up rotational force (what many brands somewhat erroneously call "lift"- it's not lift, it's nose up rotation, you can't generate extra vertical lift by moving the Cof M in relation to the wings).

The main wing is doing the opposite, pitching the nose down. Again, this is force x distance from the centre of mass.

Because the main wing is much closer to CofM than the stabiliser, by moving the foil mast back in the tracks the nose down moment may increase by 50% (e.g. 20cm + 10cm ), whilst the stabiliser nose up moment only increases by 10% (100cm+10cm), so the net effect is nose down. The opposite is true if the foil is moved forward in the tracks (Nose up).

As Rod says, longer fuselages require the mast to be set further back in the tracks for equilibrium. This is because the stab is further aft, generating extra nose up rotation (Force x distance), that needs to be offset by putting the foil further back in the tracks. The other option is reducing the angle of attack on the stab so it produces less downward lift (Force x distance).


(As an aside, my day job is flying aircraft, and for every takeoff we do we calculated the exact CofM, and then adjust the stabiliser Angle of Attack accordingly. We wouldn't think in terms of moving the Centre of Effort, that's really just a sailing term used to describe lift from a single sail, although there's nothing wrong with looking at it that way as long as you look at the combined net forces and moments of both main wing and stab)
Top

Zeeko did a diagram explaining how the rear wing pushing downward stabilises the centre of lift.

The reason stabilisers work is that they lift in the opposite direction to the main wing, and if the CofM is in front of the main wing, any perturbation is dampened out. This is known as positive stability.

Say you're foiling (or flying) along totally in balance, and you hit a little turbulence that slightly changes the foil (or aircraft) to 1 degree more nose up. The result is that the main wing (pitch down) has a greater AoA, therefore more lift and extra nose down rotation is created, however the stab (pitch up) has less AoA, so the nose up rotation element is simultaneously reduced. Both of these mean that the foil is forced nose down and returns back to where it was before it hit the turbulence.

Monofoils are neutrally stable, and some aircraft actually have negative stability (any perturbation runs away in that direction). These are fighter aircraft that have fly-by-wire computers helping the pilot fly, otherwise it would be impossible.

Bigger stabilisers or longer fuselages are more stable because they mean that the CofM must be further in front of the front wing. However they are also more resistant to pitch changes, hence harder to pump. 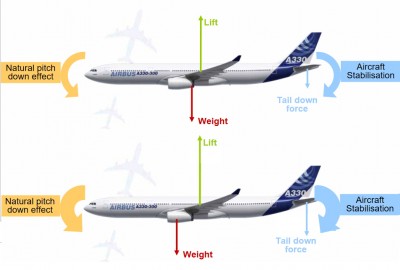 Hope to try the 1100 soon in lightwind, but today wasnt the day for that, pity

Yesterday it was side on bigger nasty waves, but fun for wavesailing, today SSE wich means side off here and long hip to shoulder-high waves from over a km long rolling in.sometimes a bit of crumble never really steepening up.
You could here the wavesailors with 6m swearing because there was not enough to waterstart and not enough power on the wave to really ride, but for the wingers it was heaven.
One of the guys always wears his Iphone with an case with him to take pictures from the water, today as well 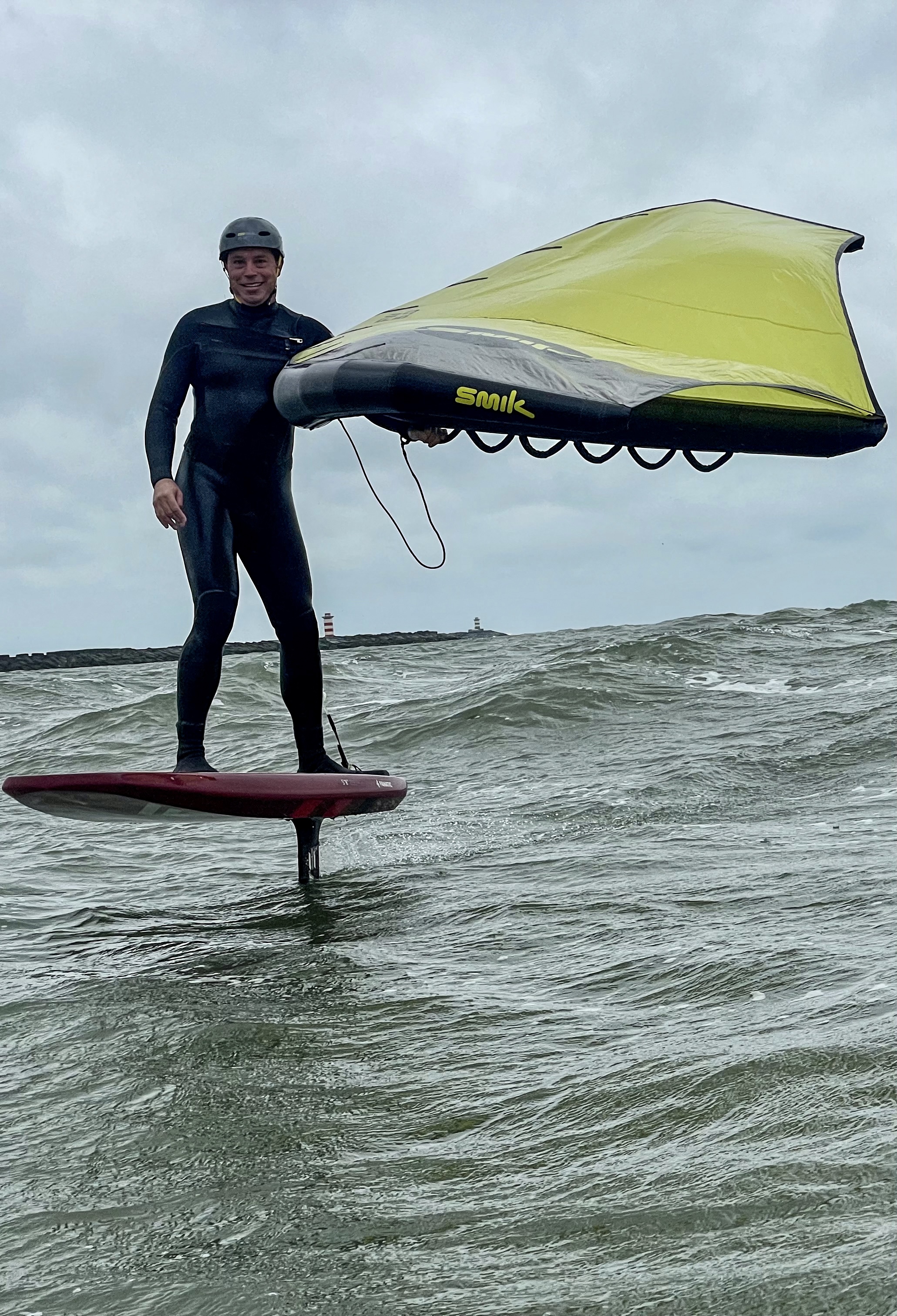 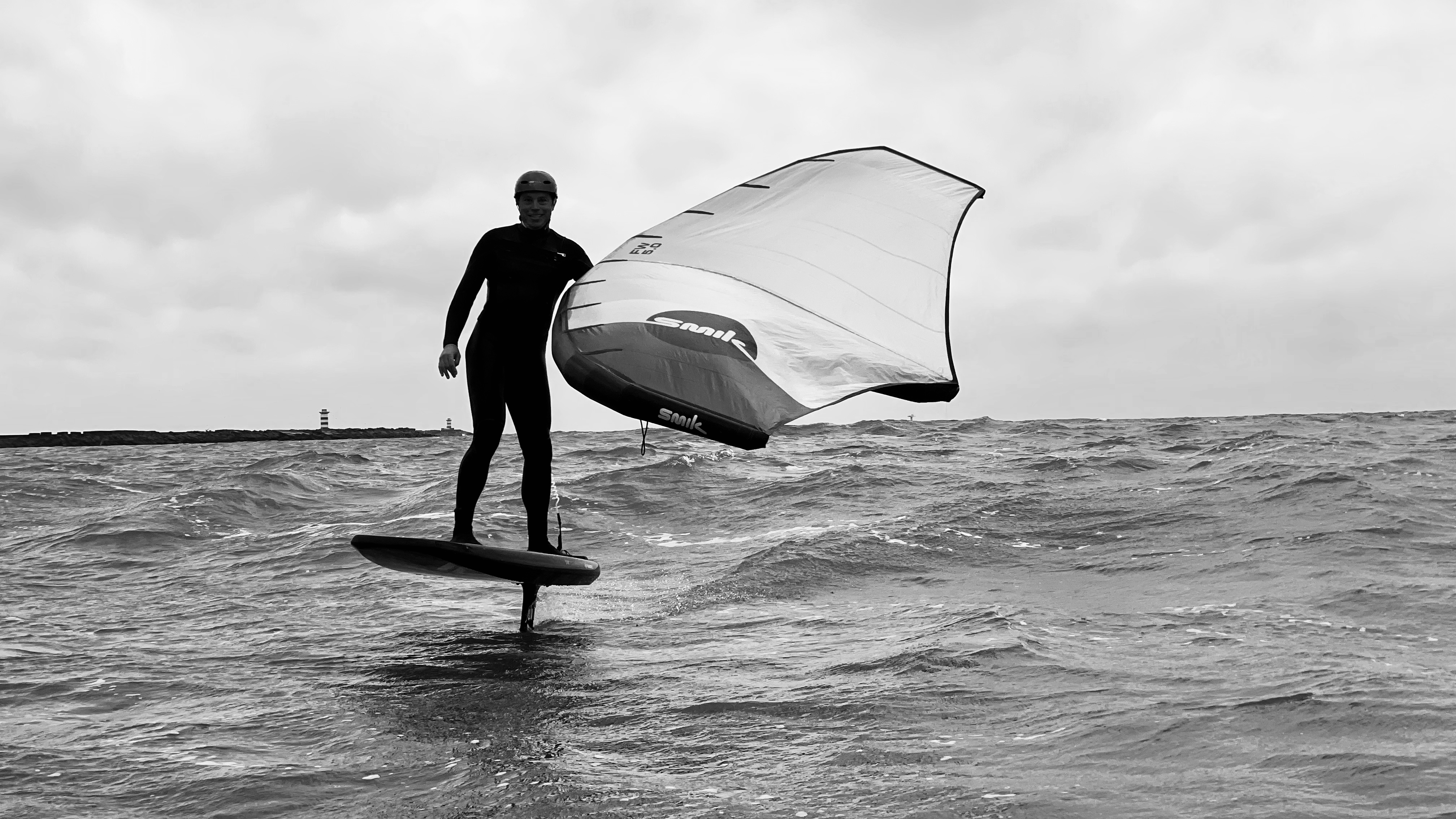 With my 5m I could pick up a lines 1km outside and ride them all the way in. When the wave steepens up a bit I could make some nice turns and carve the wave, on the weaker spots it was just gliding to the next steeper section.

a friend of me was on the Gofoil M200 I used before and the difference in speed to sail out but also glide and speed on the wave was significant. He often dropped from the wave where I kept gliding and gliding.
Really happy with the Sab and impressed by the performance.

I did a short change with a friend who is a Naish rider and has the Naish hoover95l and the Naish carbon mast with HA1400. That felt good too, but less smooth and slippery as the Sab950
The smaller and lighter board is really nice, but we both agreed that my foil feels more slippery and easier to turn.
Top

@Tim 319.
Just wondering,
If I ad shims to the stabiliser it will change the angle. So there will be a bit more drag but also more lift at the front wing right, so earlier planing but a lower topspeed?
I have to try that yet as my former foil, the Gofoil didn't had that option.
Top

Have now checked my Slingshot fuselages and Rod is right.
In the B position the short fuselage mast attachment bolts are 4mm different compared to the long fuselage. Guess it all counts.
But the position of the front wing CofE is pretty much the same for each size in the range.
This would seem sensible as they Infinity wings were designed at the same time that Slingshot were building kite and Windfoil boards with fixed plates and deep Tuttle boxes only. So without any adjustment it makes sense to keep the balance point relatively consistent no?
Just back from a pump it on wave session with the i84 and 5m Echo. Looking forward to getting a lighter shorter board.
PS I have been using CofE as a simple term. Although pretty well versed in aerodynamics after 40 years as a aircraft engineer I didn’t feel the need to make it too complicated for myself.

Jeroensurf wrote: ↑Mon May 24, 2021 12:09 pm @Tim 319.
Just wondering,
If I ad shims to the stabiliser it will change the angle. So there will be a bit more drag but also more lift at the front wing right, so earlier planing but a lower topspeed?
I have to try that yet as my former foil, the Gofoil didn't had that option.

If you add a shim that means the stab is angled down, it has a greater angle of attack, therefore more lift (in the downward direction) which creates a nose-up pitch rotational force, and also slightly more drag.

Just having extra nose-up pitch rotation in theory won't get you foiling at a lower speed. However, it will feel like the nose wants to lift more. If the nose does come up a bit, this momentarily increases AoA (on the main wing) and therefore you get extra lift. The alternative to this is that you could have done this yourself with back foot pressure. If the nose comes up at too low a speed, you can end up stalling the foil, so extra nose up pitch isn't necessarily a good thing.

The only way to increase vertical lift on a given foil is to increase the speed, or the angle of attack (up to the stall AoA).

The most important point is this: if you're trying to balance the foil, adding shims is only really necessary if you have a tuttle box and don't have tracks in the board, or you're right at the limit of the tracks and need extra down/up rotation. Changing the stab angle and changing the position of the mast in the tracks is essentially the same thing.

So, to answer the question simply, if as requested you want more front pressure just move the foil further forward in the tracks. Messing around with shims is pretty pointless when you don't need to.
Top
Post Reply
173 posts