A very successful Event, with wind every day and 7 Eliminations in both the Men's and Women's Slalom, giving 2 discards - and 4 in the Women's Foil, giving one discard.

The location seemed to be good - with a hotel very close to the Event site, and the rigging area strung along the waters edge. It was very hot and sunny, and the Covid situation was very good, with no masks needed.
It is Israel, and there may be some competitors who would not want to compete in Israel, so if it happens every year, it will be a discarded Event for some.

The wind might have been a bit worse than usual, as the week before seemed to have stronger wind. The Event week, the wind turned out to be variable and gusty, but it turned up consistently every day.

For competitors, it seemed to be very difficult to decide what to use - except for Nicolas Goyard and William Huppert, whose choice of nothing but foil took them to the podium. So it was a location that particular week that suited foil. Next year, if the wind is stronger and more consistent (which is fairly likely), and they set the racing further from shore and with more downwind reaches, it may favour the fins over the foils.

For sure, all the competitors will have to work to try to get to Goyard's level on foil - he has shown that there is a lot of performance that they are missing.

My guess is that the women have a lot less complaints than the men. Having separate fin and foil races made choices easier and they all seemed to really enjoy the racing.

The men's Event was perfect for providing evidence for the foil/fin debate. It didn't provide a clear answer as to whether mixing fin and foil was a good idea. It certainly made the outcomes both very unpredictable and predictable. Predictable only for those who only chose foil - but if the other men improve their foiling equipment and skills, then that will maybe change too.
The danger aspect also got a good trial, and the worst injury seemed to be to Sebastian Kordell, who twisted a knee when the foil breached while testing for top speed between races, and his front foot got stuck in the strap.
One thing they might do for safety is to follow the Olympic Foil rules and specify that the trailing edge of wings and foil masts must have a minimum height of flat surface. If they were going to keep them mixed in the same races, they would probably have to do the same for fins. Sebastian Kordell once missed a Fuerteventura event when a board moved and he got cut by the fin on the beach before the start.

The media coverage was fairly good. What is needed is live feed from a drone following the races, that shows all the important action in the races. It is best to film with the sun behind the drone and the worst places to film from are from a long way in front of or behind the sailors. We got a lot of the wrong views and a few of the right views.
They were doing their best, and it may be that having to film a lot of it from the shore and from a long way away, prevented them being able to get the drone shots. Drones are key to getting the best coverage, and the pilots did show the necessary skills at times, with some excellent coverage of some races.
There was a drone that was flying very close to the racers, but we were not seeing footage from it, so there maybe some very good Event videos yet to come. The event was screened on Israeli TV, so it may be that they had some better footage than the live feed had.

The communications were a bit disjointed, so Ben was often unsure of what was happening and who had finished where. If they had better drone coverage, Ben could have identified the riders better, and Ben's suggestion (eg. using different coloured helmets) that the riders should have some way of telling them apart if they are using the same sail makes sense.
Top

Its good to have another venue plus someone willing to stump up the money. For their 1st go at it, I thought the production was ok but definitely lessons to learn as you mentioned. Hopefully its on the calendar next year.
They made a mistake putting the 3rd mark near the beach in the gusty wind line created by the hill behind the town. Good for spectators on the beach, but poor for racing. It made some races a lottery, if you had a gust or lull to gybe. You dont put marks in wind shadows in down wind slalom. The wind was very gusty, sometimes there was a massive hole on the outside mark as well. Its looks like a windy place after 2pm, but only when its really hot.
Identifying racers with the same sails has always been a problem. Now with foil or if they mix foil & fin and helmets are compulsory then different coloured helmets would be the way forward. So it should happen...............

A few miles north the wind blows a different direction and looks more consistent, but that could just be where the anemometer is placed and very local affects. Maybe it blows around Mount Arbel at the slalom site. A bit difficult to say from my sofa 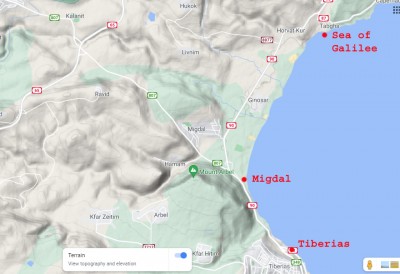 Yes Phil - it's good to have a new venue and one with very reliable wind during those 3 months.

From this video, it seems all the men asked, are happy with the mixed fin/foil racing.


Mixed fin/foil does have another advantage not previously mentioned. It seems that different body types are less important with foil than with fin. So for example, some of the shorter women might do better against the taller women by using foil versus fin? The same could apply to the men, where some of the shorter/lighter men might be able to move up the results charts compared to the taller, heavier men, who often have a higher top speed with a fin.

IMO fin racing makes for closer, more spectacular racing, and all foil races are likely to look less interesting to most viewers - except in lighter winds.

Based on Formula Foil, the wider the board the higher the performance with a foil. If they wanted to even things up a bit, they might declare a narrower width limit for foil boards - but that might raise the lower wind limit.
I think the PWA slalom board width limit for 2021 is 85cm?
The PWA Foil board 91cm limit choice was quite unanimous (and fits with the Olympic choice too) - although the PWA designs are a bit more extremely square - partly because they do not also have to be used for slalom.

Interestingly for 2020, the PWA sailors were strongly against combining fin and foil in the one race.
https://windsportatlanta.com/content/pw ... les-122718

If they do continue to mix fin with foil and the foil wind limit goes up, they may be able to reduce the number of slalom boards the competitors have to haul around from 3 to 2.
Antoine explains that the large slalom board is going to become obsolete very soon, and they will be dropping to 2 slalom boards - at 48 minutes in this video. Antoine also said that the top speed he was reaching in Tenerife slalom on the foil was 32 knots. Nico Goyard was hitting 35 knots in Israel.

Sailing/wind/kite racing are boring (America's cup is good though) like F1 as not a lot happens, but the fin/foil mix brings variety (gear choice, tactics, drag speed vs gybing etc) to make it more eventful. Favour least rules so as not to inhibit innovation.
Top

Ben and Maciek have done an After-show video for the Tiberias event.

I think it's a good idea. I'm not sure it has to be live, but that can give it a seat-of-the-pants feel - which is better than a pants feel if the internet goes down.
A non-live show could follow up on questions from social media about the event. It would maybe be better to structure the questions better and make it easier to get answers and get the answers across.

There are still a lot of questions that could be asked and and maybe answered after the Tiberias event.

The organising of the racing, setting the courses, choosing where to locate the racing inshore/offshore, wind conditions/angles, choosing the right gear.

Fin versus/plus foil. What can be done to make the racing closer? Set a lower sail size limit for foiling? Set the courses to avoid light wind areas? Make the reaches more downwind? Can they run drones offshore and get good live coverage?
Top

They should get some more racing in this week from the current forecast. https://www.windguru.cz/548219

There are 39 entries in the Men's Slalom and 10 in the Women's Slalom.

Day 1 highlights on FB PWA page. Looks a good place for this sort of thing (Bol, not FB).