Chat about stuff that doesn't fall into the other categories here.
Post Reply
10 posts • Page 1 of 1

I recall reading somewhere that the women's foil equipment would be less restricted than the men's for 2019, but the PWA rules seem to have the same rules for both.
https://www.pwaworldtour.com/fileadmin/ ... hanges.htm

The lower wind limit for Slalom is 7 knots. There doesn't seem to be a PWA lower wind limit for foiling. The general opinion in relation to the equipment being developed by Starboard is that they can foil in 5 knots of wind, but it requires 6 knots of wind for racing. The foils tend to cope with lulls better than slalom gear, and that is more the reason that they tend to foil in the lighter winds.

After the unpredictable light winds contributed to a single elimination at Marignane, Matteo Iachino finished in 25th place whereas Mortefon and Albeau finished first and second.
Those 3 have tended to be the top 3 in recent years, so Iachino will need a miracle to come back into contention in the Men's Slalom. Iachino should be one of the favourites for the Men's Foil Championship though (if he can partake in it without hampering his slalom results).

Delphine Cousin Questel is a strong favourite for the Women's Slalom Title, and will be favourite for the Women's Foil Championship, with Maelle Guilbaud and Marion Mortefon also in contention.
You may not have heard of the Alabau sisters (this is their first PWA event), but they will be contenders in the Foiling Championship. Blanca won the first Race at the 2018 Azores Open Foil event and Marina (2012 Olympic RS:X Champion) finished a couple of seconds behind Delphine in the 9th and final race. It was the closest ever Foil Event win, as it all came down to who won the last race.
Jenna Gibson has had to withdraw - appendix operation.
There may also be others who have been quietly training hard and will be a surprise. So despite it being the first ever PWA Women's foil event, there could be some good racing from the start.

The weather forecast is still looking more suitable for foiling. Lots of foil boards in this picture of the beach.

Sebastian Kornum showing how to keep the foil flying in very little wind. We may see a lot of that in Japan.


There has been plenty of wind before the event, but unfortunately the wind drops as the event starts. Hopefully there will be enough for foiling.
The wind seems to increase about 3pm in Japan - about 7am in the UK.

Lena taking the opportunity for some slalom practice before the wind goes. We might not be seeing 6.3m sails for a while. The 10th to 12th are looking like foil days, but hopefully the 13th to 15th will have slalom winds.

The 2 PWA events this year have had a lot of upsets and surprises, but some very good battles. The Live coverage is getting better each year.

As expected, the wind was marginal. It was enough at one point to have them lining up for a first elimination of the foiling, but the wind would not stay steady enough and strong enough and racing was abandoned for the first day.

The plan is to split the men's foiling into two heats and the top half of each heat goes into the final. So maybe 29 men in each heat and the final.
The women's foiling will be a 12 woman final each time.

The order is hoped to be :
Men's heat 1, then 2.
Women's Final.
Men's Final.
So they should have good chances of getting a result in the Foiling and will be able to go to Slalom hopefully without having to worry about completing the foiling.

Antoine pointing out that the lighter sailors (an example would be Kiran Badloe - an Olympic RS:X sailor who could be one of the favourites this year in foiling) can pump the foil to flying in lower wind than him, so in a tack they would be able to gain a lot - or maybe Antoine could not even get flying again. That would suggest that the lower wind limit for foiling will be lower for the Olympics than it will be for the PWA.
Because of the importance of pumping, the men may be able to compete in foiling in less wind than the women.

The Alabau sisters Marina and Blanca arrive in the PWA to compete in the foiling.

Day two and the foiling starts in what was reported variously as between 4 and 10 knots, but it varied from race to race. No details as to the wind limit, but they might have been racing with 5 knot lulls. Unfortunately a lot of interference of the airwaves by outside sources in the area messed up the transmission of the drone video, so the coverage was hampered a lot by that.

They managed to have a lot of good foil racing.

One incident where Thomas Goyard FRA3 admitted to crowding Gonzalo Costa Hoevel ARG3 out at the start line. 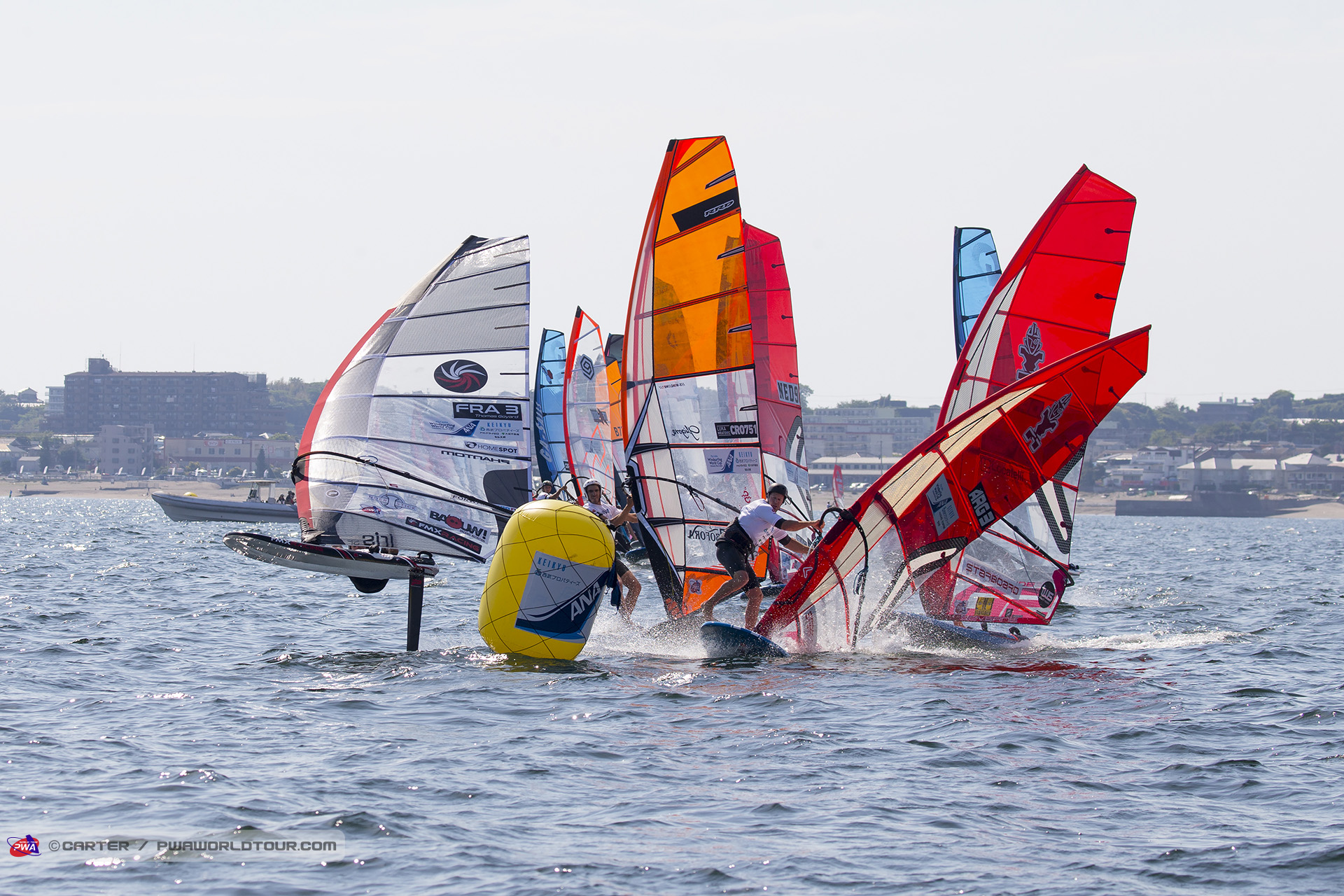 Day 3 was a lay day when the wind never turned up.


In the Men's Thomas Goyard was the star of the race and in the Women's Delphine won both races, with Marion Mortefon managing to take a second place off Marina Alabau. The Day 2 leader Kiran Badloe would have finished second on day 4, but was disqualified for jumping the gun.


Delphine has taken control, seemingly by sticking close to Marina around the course and using her extra speed advantage. Delphine is a bit heavier, but is using a 9m, whereas Marina chose a biggest sail of 8m for this year's PWA. The racing at this event has mostly been just above the minimum wind limit.

The men's event is harder to read, in that Pierre Mortefon is now leading, so the PWA sailors are managing to keep their noses in front in both events. Thomas Goyard and Kiran Badloe are looking very good in this light wind, but both of them have a disq. (+32 points), so will need a 4th race to be able to discard their disq. If they get more wind for foiling, several of the PWA riders may become a lot more into contention, but if Day 6 is that strong, they will probably favour doing more slalom.

Tuesday (Day 5) is looking windier and promises some rain, but probably enough wind for slalom - but it might be their only day for slalom.

Day 6 is the final day and currently looks more like a foil day.
Top

Unfortunately Japan was a washout for Slalom. They had wind until the day before the event started and then there was only enough wind at times to run some foiling.


As Thomas Goyard said, he and Kiran Badloe are doing well at foiling, but both of those top contenders had a disq. for jumping the start and there were only 3 Eliminations - so no discard. Thomas weighs about 76kg and was using the same size of equipment as Antoine Albeau (99kg). The RSX guys are also pumping the sail and foil on the upwind leg, so they are foiling in very light wind (lighter than most of the PWA sailors seem to be able to foil in). That could be an issue in the future, if there are enough sailors who can foil in very light wind, but heavier PWA sailors cannot. At the moment, PWA Foiling is a bit of an add-on to Slalom, which is the main event. In practical terms, it makes sense for the PWA to foil in wind strengths that the PWA Slalom sailors can also foil in.
It does seem that the potential is there for the Olympics to have foiling in very light winds - lighter even than what the PWA may use as a wind range.

Day 6.
They only completed 2 more Women's Eliminations and Delphine won both, with Marion getting a second place in one of them. So the Event was a clear and dominant (in the end) win for Delphine with Marina second and Marion third.
Delphine was using a 9m sail and Marina's biggest sail for the year is an 8m. With the foil events usually being squeezed in when there isn't enough wind for Slalom (which has a 7knot lower wind limit), there is a good chance of a lot of very light wind foiling this year. You have to declare your 3 sails for the year before your first event.
Once Delphine knew she had more speed on the long reaches, she seemed to adopt a policy of staying near Marina on the upwind leg and even if she was behind Marina at the first mark, she could overtake her on the reaches. It will be interesting to see if Marina can find an answer to that - or maybe they will change the courses and that will even things out a bit?


The men only completed the 2 qualifying races for a fourth Final (which would have allowed a discard and made a big difference to the final results).
The wind dropped and the Final was cancelled.
Thomas Goyard spent a long time foiling around after the cancellation to show that foiling could still be done, but there was no Final so the results from Day 4 stood.

It may have been a non-event for the Slalom sailors but they still partied before leaving for Korea. 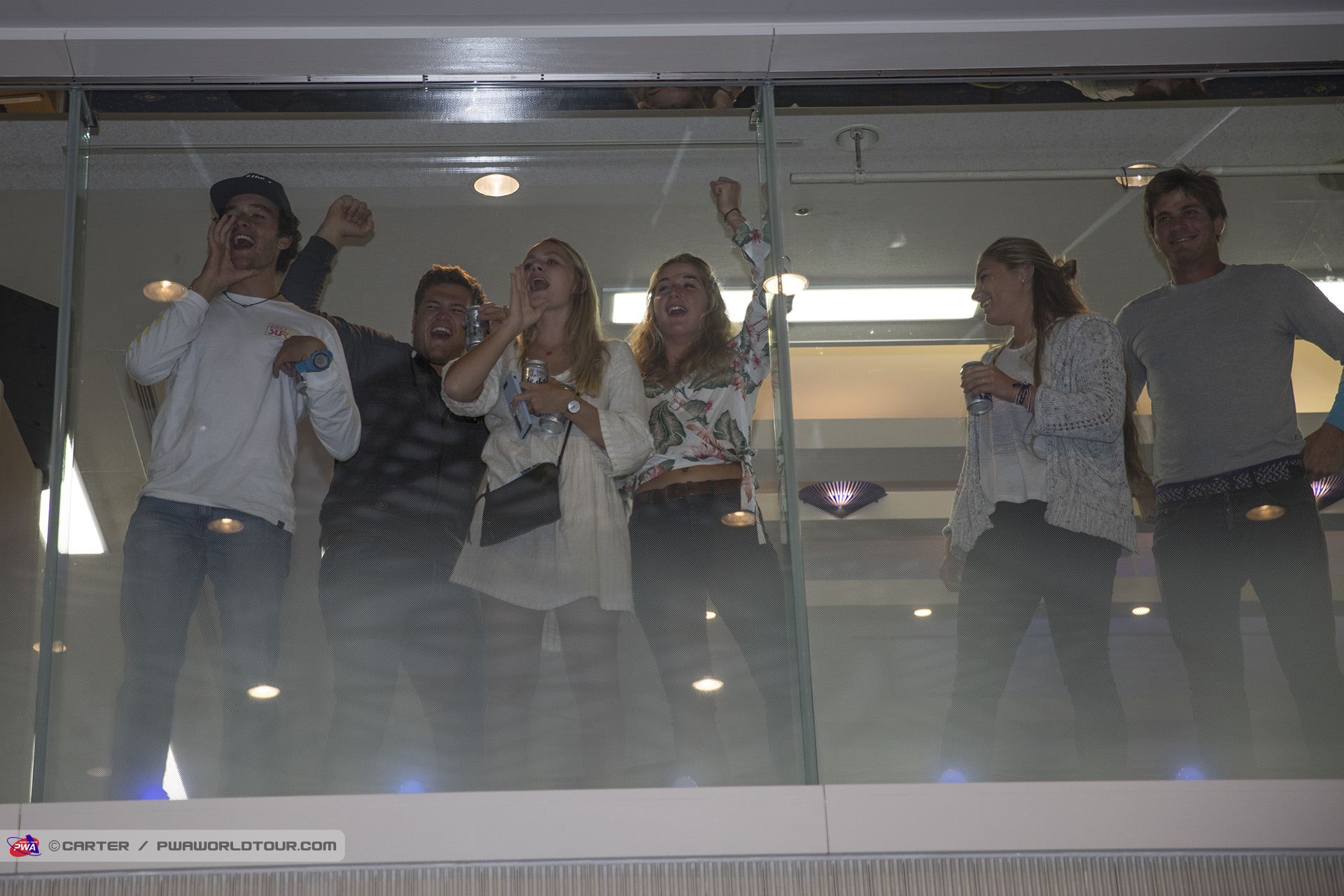 On to Korea which starts on Saturday 18th, and they better hit the water early as the first day looks like the best day with a lot of wind forecast, and the wind to gradually die during the Event.
Top
Post Reply
10 posts • Page 1 of 1